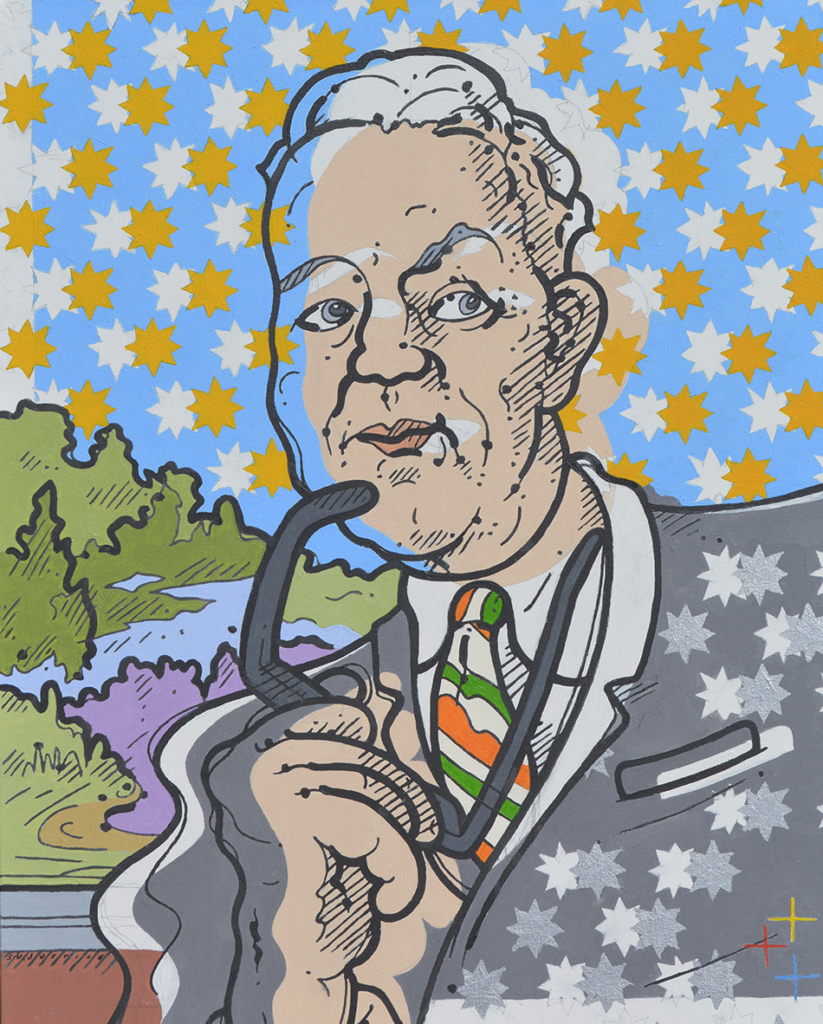 With this portrait I am honoring Joseph C. Fitzpatrick, my former art instructor at the Carnegie Institute in Pittsburgh, where I studied in my formative years.  He also taught The Steel City’s very fair-haired son, Andy Warhol.  Fitzpatrick’s training was classical, though he was open-minded enough to identify a good thing when he saw one.  Andy famously went on to have fifteen minutes of fame.

I allow some Andy to leak into this portrait through the Warholic slipping of the color registration, which characterizes many of his own prints.   My fake registration marks have separated into a Steelers logo – I’m sure you noticed that.

I reference Fitzpatrick’s classical background with a classical background, here nicked from the Mona Lisa, but which also calls to mind the Irish or Western Pennsylvaniaish countryside, or even the scenic paintings in Carnegie Museum’s famous animal dioramas, which Firzpatrick had us sketch endlessly with soft 4B pencils on newsprint paper, while sitting on the hard marble floor.

The Renaissance stars (some of them steel) also refer to the Pittsburgh own Renaissance, which Joe, Andy and I participated in.

Fitzpatrick said every artist should have someone standing behind him with a hammer to clobber him when they think the artist is finished.  Many people believe the Mona Lisa was never finished, like so many other projects Leonardo da Vinci took on.  Freud would have had a field day with him.  (What’s that you say?  He did?)  But think of all the hammer blows Leonard avoided receiving.  Which Michelangelo would have willingly delivered.