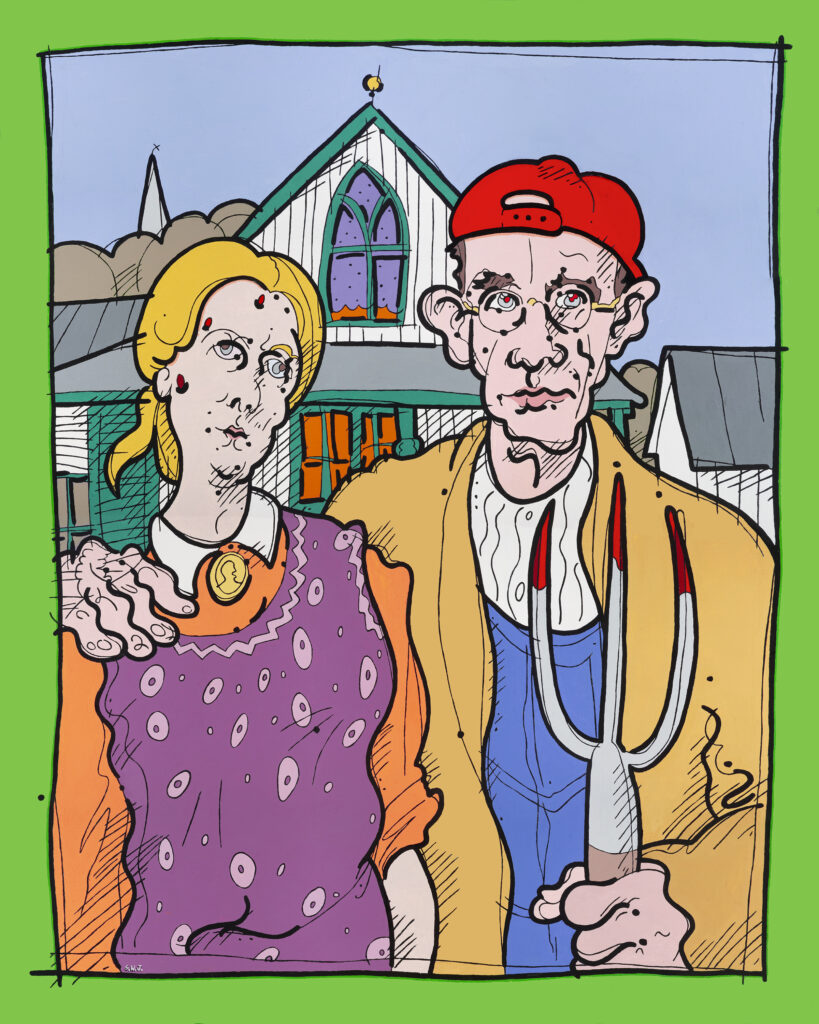 All the really good ideas I ever had came to me while I was milking a cow.

I once showed up for the reception for my solo show at a trendy restaurant/ wine bar/ gallery, and found the place packed with people, bristling with cameras and awash with light.  I was quite flattered that I should be the center of such attention until I learned that the hubbub was not for me, and that it was no longer my solo show.  The restaurant/ wine bar/ gallery owner had hung, in a prominent spot on a wall, a crude (but nicely framed) crayon drawing her very young daughter had done, and it was her show now.  The media attention was all for her.

This painting, which was part of that show, is intended to condemn, rather than condone or make light of domestic violence, or abuse in any form, a point I had to make that evening when I was cornered and grilled by a couple Guerilla Girls, who are a feminist group of artists and activists from New York City, who happened to be in town.  I was ultimately cleared of all charges, but I made a note of the fact that I won’t always be available to defend or explain my work, and I need to anticipate potential misunderstandings from the start.  A mis-take is still a take.

Though it’s been lampooned over the years beyond all recognition (LOYBAR?), I, in this painting, update Grant Wood’s “American Gothic”, a classic painting that symbolizes stability in the Heartland, to instead portray a less romantic and more modern condition of trouble, imbalance and intolerance in the same Heartland.   Should we teach tolerance?  Surely, but tolerance isn’t enough.  We must also teach love, and the best way to teach love is to practice love, and practice makes perfect.

The red hat is from International Harvester, or it could be a St. Louis Cardinals hat.  We don’t know.  You see red hats all over the Midwest.