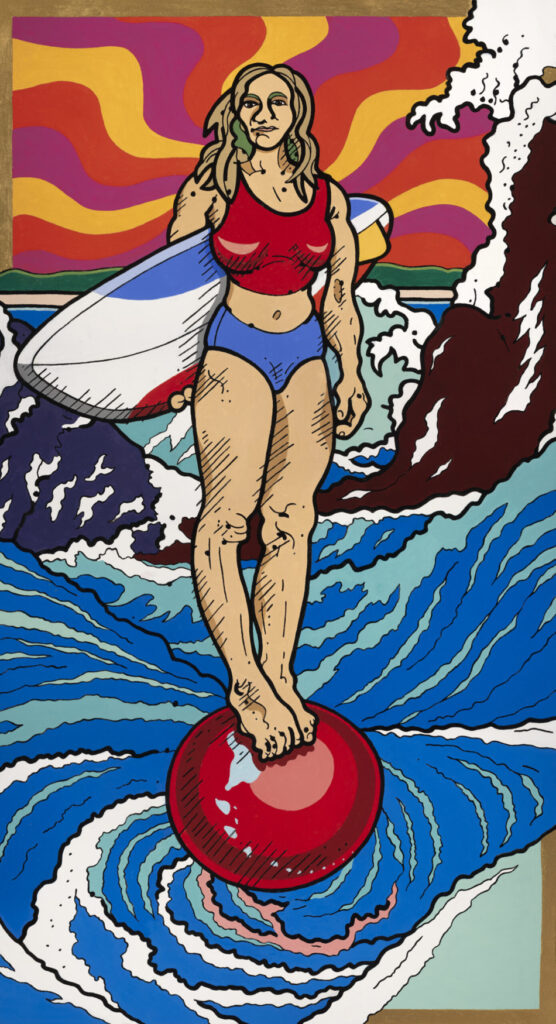 The best surfer out there is the one having the most fun.     – Duke Kahanamoku

Duke also said, “Out of water, I am nothing.”  A fish out of water.  Duke and his five brothers had Waikiki Beach literally in their back yard and they became strong swimmers, and they surfed, and they turned the rest of the world on to that strange upright sport.  When Johnny Weissmuller stood to receive his first gold medal in the 1924 Olympics, for the 100 free-style, he was struck by the fact that he was standing between Duke and Samuel Kahanamoku on the medal stand (This was Duke’s 4th Olympics in 5 Olympiads – there were no 1916 Games).  The Kahanamoku’s swam for the USA, though Hawaii was not a state yet, as did Weissmuller, who no one knew was ineligible at the time, having been born in Romania.  His brother was born in Chicago, and the two swapped names and birth records so that Tarzan could swim on the American team.  Sound fair?

Fast forward to the 2020 Olympics in Japan, where surfing appeared as an Olympic sport for the first time.  The gold medal in Women’s Short-board went to an American, Carissa Moore, who is half Native Hawaiian.  She here becomes a super-hero in this delayed Pearl Harbor tag-back, with water banging around in the foreground, inspired by old Japanese woodblock prints by Hiroshige & Hokusai  (partly for my own self eddy-fication — sorry).  To add more Wowie to the Maui, she hangs ten on a red sun that has fallen from a sky that has been psychedelicized in the style and colors of John Van Hamersveld’s iconic Endless Summer surfing poster.

I did not know what she was standing on until I was half done with the painting.  Is she standing on a gold medal?  No, glory’s not the only point.  A globe?  Too grandiose.  A beach ball?  She’s a surfer, not a seal.  A disco ball?  I’ll not even respond to that.  A large pearl?  Botticelli already did something like that.  A 3-ball?  Only the 8-ball can float.  (Then why’s the sport called Pool?)  The only thing that made any sense to me and suited the magnitude of Clarissa Moore’s achievement was the Rising Sun.