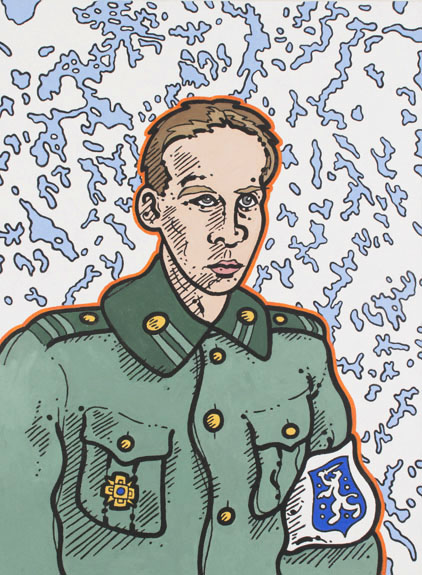 We fought for home, faith and fatherland.     – Carl Gustav Mannerheim

In World War II, neutral little Finland was backed into a courageous fight for survival with a neighbor more than 50 times its size, Russia.  All Russia wanted was control over Germany’s access to Leningrad, which they ultimately achieved, but with great loss on both sides.  My mother’s cousin, Erik Tuomela, left his blood on the snow.  By which I mean he died.

Behind him is painted a map showing the snow and lakes of eastern Finland.  Or maybe it’s sky and smoke.  Such decisions I leave to the paintbrush.  Like I once said Bob Ross once said I said, “The paintbrush never lies.”  Not unless it’s drunk.  Then I don’t know what to believe.