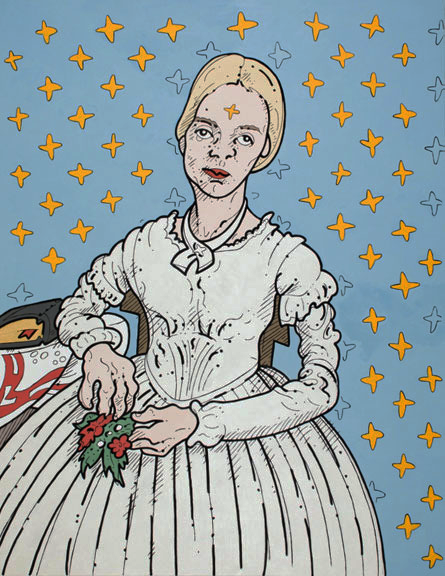 Emily Dickinson was a woman on fire, which might be why they made her live in the attic.  An attic fire is more desirable than a fire on the first floor, though neither scenario is particularly appealing.  In attic fires, firefighters may have to chop holes in your roof and pump water into your home for half an afternoon.  Your house will be filled with more water than the swimming pool at a JCC.  I’ve seen this done.

The starting point for this painting was the only photo of Emily (and even this is a dup. from a daguerreotype), the poster child for suppressed 19th-century female creative artists.  It shows that she had more vitality and better looks than do the sexless, Puritanical portraits of her that we all expect that make her look like an anorexic Wednesday Addams.  But no mere wallflower was she — her poetry is like lightning.  (And I believe she would have made the cover of Vogue were she alive today.)  She actually preferred to wear white.  Not that she needed fashion to make a statement — all she did was make statements — she was a poet!  White meant several things to her; it meant strength, energy, and radiance.  It meant ambiguity and ecstasy.  It meant hot.  It meant all colors, and white is all colors.  She read voraciously, and while other women wrote about angels, she wanted to become one.  She could pretend she was one.  So that’s why she wore white.  She didn’t have to “get real” — she lived in an attic, remember?

In this painting, she poses before wallpaper patterned with the heavens alit with 52 suns, one for every day of the week.  But, lo, a storm brews beneath the table beside her.  This rainy weather will continue into last week with highs in the late 60’s.  And notice her Bible on the table.  That’s not a bookmark sticking out of its pages – that’s the very tongue of Satan him/her/their/your/our self, smashed flat as a Boston accent.