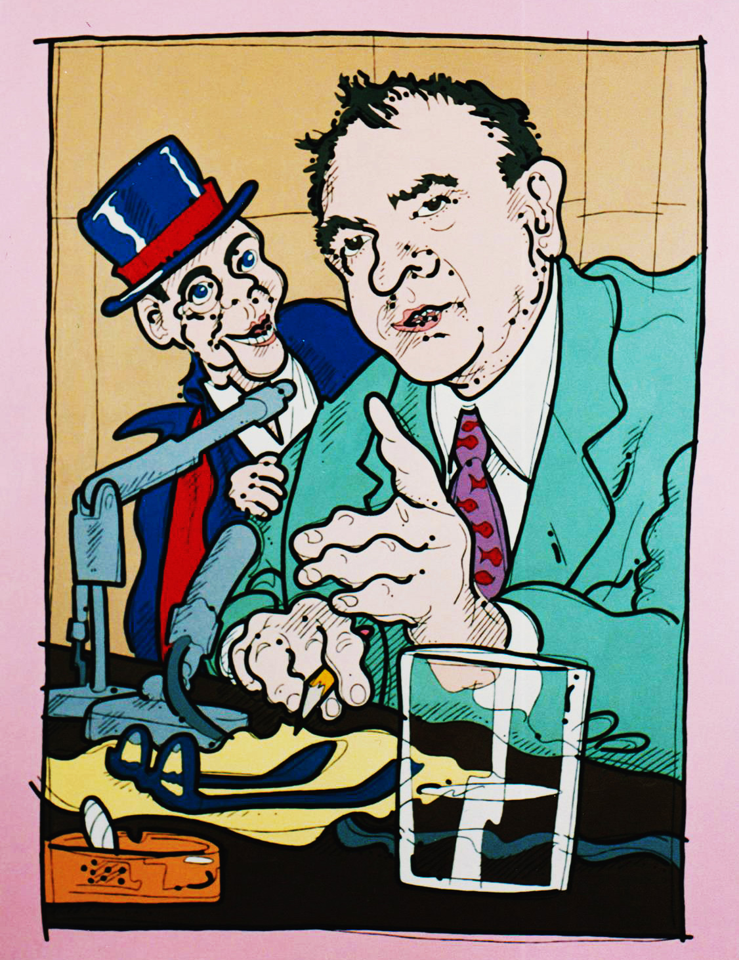 McCarthyism is Americanism with its sleeves rolled up.       – Joe McCarthy

… Or maybe with its pants pulled down.

Here I portray two McCarthy’s during the communist witch hunts of the 1950s, Charlie and Joe, both of them dummies, with Charlie playing the part of Joe’s uber-patriotic sidekick Roy Cohn, goading Joe, prodding him, correcting him, egging him on, trying to talk even more sense out of his head.  Joe’s glass is either half empty or half full.  What’s in it, Joe?  Vodka?  Gin?  We don’t know, because Joe pleads the fifth.

This painting is now a part of Youngstown’s Butler Institute’s collection, which also includes work by O’Keefe, Cassatt, Sargent, Pinkham, Homer, Hopper, Rauchenberg, Close, Segal, Bellows and Warhol.  A bunch of big shots, yes, but none of them ever sang a duet with Judy Garland, as I have.

I was maybe 5 years old, and she was to appear at a department store in a short scene supposedly from the Wizard of Oz, but set in a fanciful snowscape, since it was October (of 1961) and Christmas was coming, eventually.  There was fake snow and a candy-striped North Pole (because that’s what it really looks like, but much larger).   The rest of the cast consisted of a fake Toto with a scarf and a sidekick in a polar bear suit.

Judy was very abrupt and was obviously displeased to be there.  And she looked rough — I remember thinking that they promised us Dorothy but delivered the Wicked Witch.  Judy sang “Somewhere Over the Rainbow” and started to offer the mic to us kiddies so that we could sing along.  My turn lasted no more than 10 seconds — she impatiently yanked the mic from my trembling little hands when she realized I didn’t know the lyrics and moved on to the next kid.  My relief was greater than my shame, but my career was ruined.  I couldn’t even get a gig in Peoria after that.