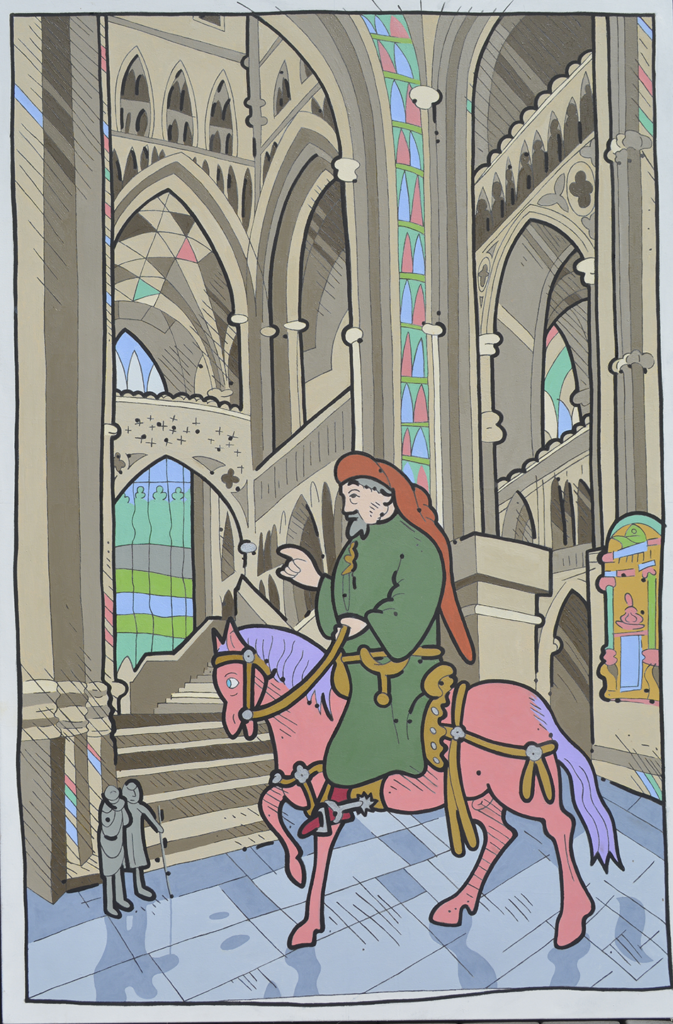 Goeffrey Chaucer writen Canterbury Tales and some other things, including a body of poetry big enough to fil a Penguin anthology.  Yes, that big, and he writen all those shorter poems during a single two-week bender.

With style and mood nicked from illuminated manuscripts and cathedrals themselves, a pilgrimage unto Canterbury is here shown with Goeffrey himself in his own tale, confronting pitous beggars.  But Chaucer was nat so class-conscious.  Although he was a good accountant, his career checking wool exports for tax purposes was nat as lucrative as his boss Richard the Gaunt hoped it would be for the two of them, due to Chaucer’s integrity.  This also caused a lyfelong rift between him and his wyf, who really got off on being a Lady in the Queen’s court and lived highly in digs north of London, while her housbonde shivered in government housing inside a city gate with stoon wals 13 feet thick and arrow slits for windwes.  But it was the perfect place for a government accountant to brood between manic outbursts of writing.

In the top half of this peynting, soaring vaults describe the vertical, bigger-than-man sense one experiences in an ancient cathedral.  All that, just to keep reyn off the backs of people who are preyest.  As for the color, I tried to peynt the cathedral’s echo, and Canterbury Cathedral does look like it’s built out of tons upon tons of echo.

The rendering of figures in old manuscripts always looks so amateurish and cartoony to our eyes, that even the horses resemble toys, so I took the next logical step and turned Geoff’s hors into the toy, My Pretty Pony, which adds levity to all this medieval ponderance.  Levity and branding.  I rely on the hors to put the canter into Canterbury.