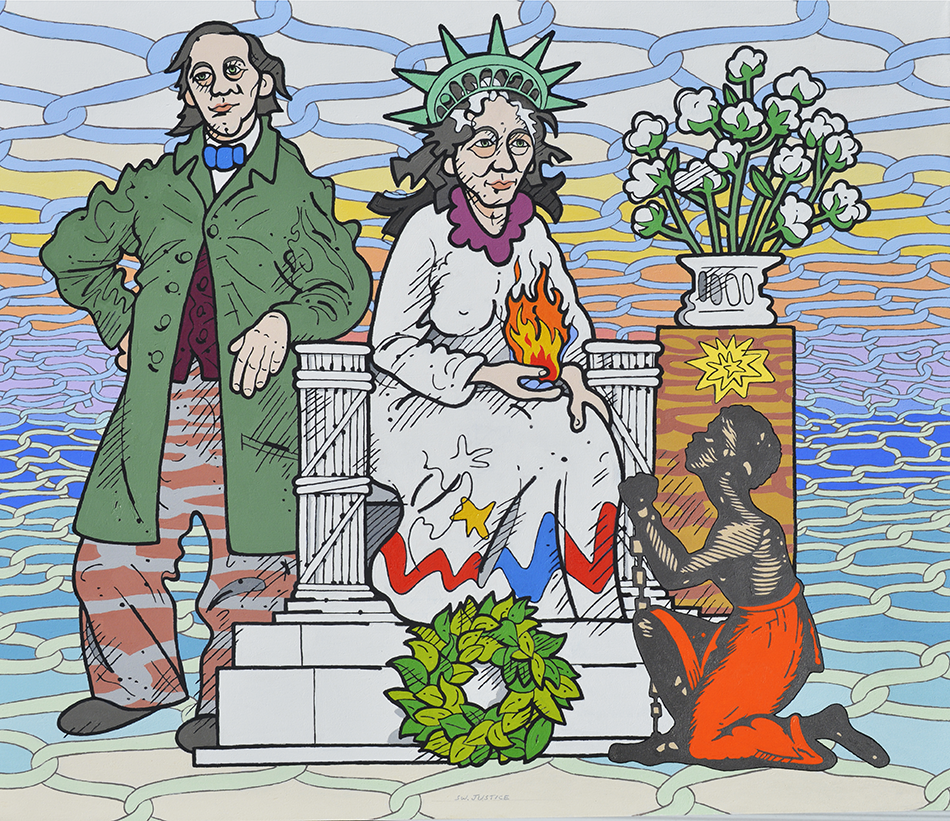 Is this the little woman that made this great war?     — Abraham Lincoln

In this multiple portrait, I explore the New Jim Crow and other 21st century disfunctions and broken promises, with references to 19th century studio portrait photography and allegorical art.  An updated character from an abolitionist poster (printer Josiah Wedgwood’s invention, not mine), appeals for freedom to the two celebrity abolitionists, public intellectuals and siblings — Harriet Beecher Stowe sits in the Lincoln Memorial chair and Henry Ward Beecher dreamily ponders his next lecture.  Or dalliance.  (*Abe’s chair is made from marble, though many people take it for granite.)

A chain-link fence (*Invented in England by Charles Barnard in 1844, btw), a tool that is alternately employed to keep people inside some places and outside of others, in this story plays the part of the sea and the sky, which both divide and unite.  I tried to capture surf guitarist Dick Dales “the boom of the barrel and the hiss of the lace”, as he described the ocean.  Negative space is created above and positive space is created below, though there’s really no difference between negative and the positive space anyhow, nor between above and below.  Like people, opposites are more closely related than we credit them for.  They define one another, you know.

The heady airiness at the top of the painting describes the feeling I experienced in the cloister at Bristol Cathedral in England, when energy fills the brain, pure and unembellished by the senses.  (*Cary Grant was born in Bristol, btw.)