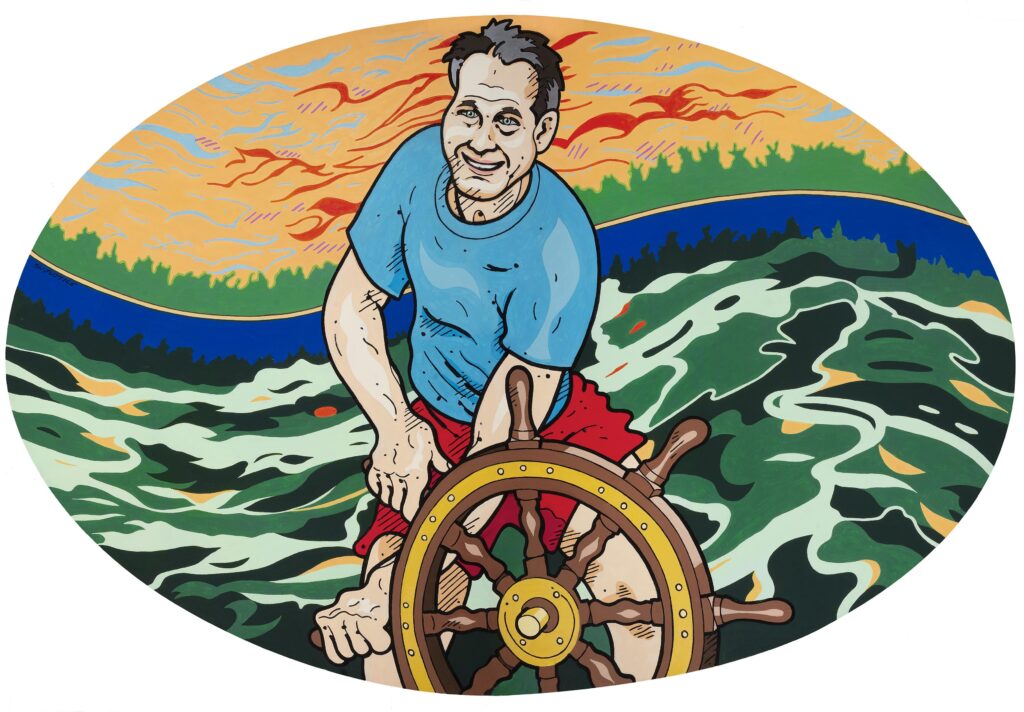 “Don” is a portrait of a dear, recently departed family friend, painted at the request of his wife, also a very dear friend.  Don generously provided the boat whenever we went on one of our many Appalachian (and once Canadian) adventures, which this painting documents, complete with mountain waters filled with mysteries and dangers.  The client (his wife) asked me about the experience of doing this painting, since she could intuit that I was indeed in a heightened state of mind through its gestation and completion.  This I told her:

This painting was very fulfilling, partly because it was trippier and so unlike any other painting I’ve done, plus it was of someone near-and-dear and for people who are near-and-dear.  I worked as though Don was watching, not that I’m superstitious or believe in such science, but that was my approach, at all times, and I wanted to do him honor and make it positive, without my usual multiple messages and occasional snark.

I have lately been allowing my backgrounds to keep up with, and sometimes even upstage, my subjects.  A striking background was vital here because there was a big story to tell, and because the subject is vertical but the wall space is horizontal.  So, to support that composition, I made the format elliptical, and I made everything all sloshy, as if it were cropped from an actual scene and driven here by Don himself.  A horizontal, rectangular format would have looked like a bad crop job with a lot of unnecessary background space.  So, the background is quite detailed but is abstracted enough that it does not compete with the subject.  The water is green like Kinzua, Cheat, Norris or any other Appalachian lake.  The sky is from a photo of Lake Huron I took when we visited Honey Harbor, but it’s turned upside-down and recolored.  (* Don’t ask me why.  Maybe because Canada seemed like another country to us.)

I had been doing so much painting and so little drawing up until recently, that I found myself caught flat-footed at the start of this project.  I had seriously been wondering if I’d lost my drawing mojo, due to age, meds or what-have-you, but it all came back and I haven’t stopped since.  This was critical, because I’m a cartoonist and draw flattish, and Don cannot be drawn well flattish.  He’s too dynamic and 3-dimensional.

Being committed to an oval format necessitated a stable, rigid panel, so I used  ¾” birch plywood.  Birch ply costs no more than a stretched canvas, so I welcomed the exercise.