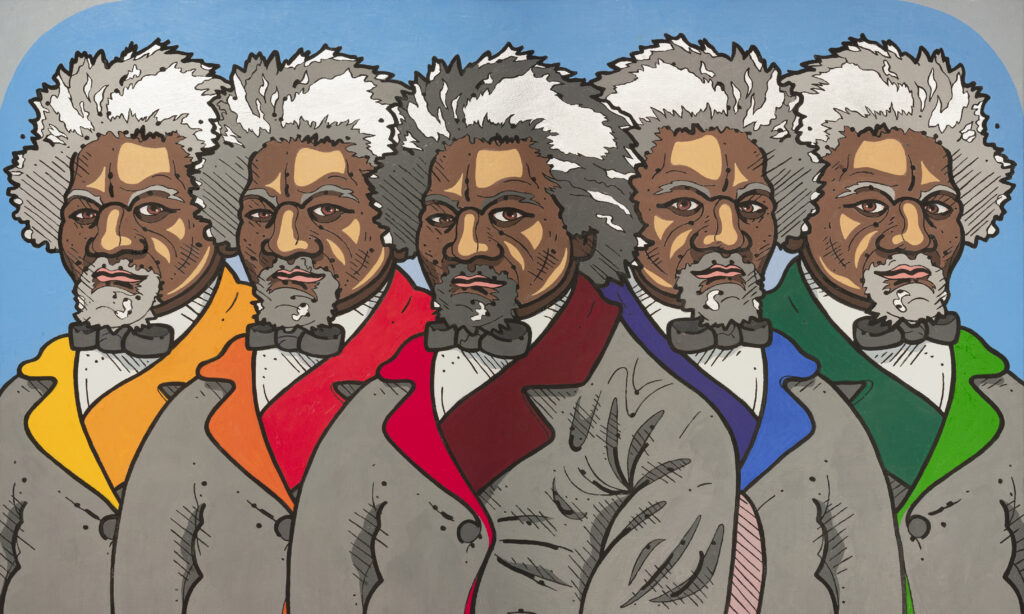 Frederick Douglass was born Frederick Augustus Washington Bailey in 1818, into the indignity and violence of slavery, and went on to become the most photographed subject of the 19th century.  And in those days, photography was not cheap: a dauguerreotype in the 1840’s might cost between 80 and 200 dollars in today’s dollars.  That alone suggests something about his hard-earned celebrity as being one of America’s greatest pugilists in the battle for freedom and equality, though celebrity is too small a word for such a big person.

He never knew his father and barely knew his mother, and educated himself from a young age.  He beat up drivers, breakers and overseers, he ran away, he networked and raised money in Europe, he bought his own freedom, and he became a brilliant writer, orator, teacher, publisher, freedom fighter, abolitionist, suffragist, veterans’ advocate and so much more.  He served in high-ranking federal appointments under five presidents.  He was prejudicially thought to be a fraud at first, since no-one expected an ex-slave to be so eloquent, but his five memoirs and his numerous deeds silenced his doubters.  You can’t fake that kind of genius.

You may wonder, whence the five Frederick’s?  I’ll tell you if you promise to never again use the word “whence”.  It is because I’d previously portrayed Douglass’s Rochester, NY, co-activist Susan B. Anthony, as “The Seven Susans”, to make the same point, that we are not talking about individuals who can be erased from history books and ignored out of fear.  We are talking about legions of every color and variety who always have been and always will be here to fight when necessary.  Does the critic believe they can turn back the clock 150-200 years to make their own misperceived inconveniences go away?  The imbalance is unsustainable and we’d be back where we are in another 150-200 years, so here we are and here we’ll stay.

The title “Don’t Tread on Fred” was borrowed from the 1775 “Don’t Tread on Me” Gadsen flag, created by Christopher Gadsen and adopted by the Marines, at a time when timber rattlers like that depicted on the Gadsen flag were used to symbolize America, way before the eagle was.