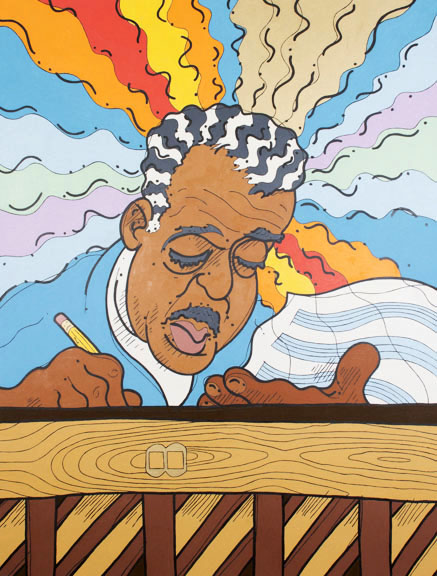 I merely took the energy it takes to pout and wrote some blues. — Duke Ellington

Duke Ellington’s outsized inspiration and productivity are described here with rivers of fire and water radiating to and/or from his head in dialog with the universe, I guess.  The Duke’s konked hair is highlighted to suggest piano keys and to also resemble the Art Deco graphics found on vintage jazz sheet music, though he’s more the elder statesman here.  Duke wears a choir robe to remind us of the early, sacred musical workout so many black (and white) musicians received by singing in the church.  The face on the pencil is lighthearted sport, and also a nod to the cartoons of Max Fleischer, whose art often involved the animation of inert objects.  His soundtracks almost always included early jazz.  The title riffs on Ellington’s song “East St. Louis Toodle-oo”, the song that features Bubber Miley’s growling, muted “wha-wha” trumpet sound for which he was well-known.  He was also known as being one of the three best trumpet players in the business, along with Bix Beiderbecke and Louis Armstrong.  Bubber died of tuberculosis at 29, and Bix died of pneumonia at 28, leaving through sheer talent (and some default) the undisputed king of the jazz trumpet.  When asked to comment on his fortune, Armstrong once said, “Za-Za-Za-Za-Zot!”

Was Duke a buddha?  Or maybe a boddhisatva?  In a sense, perhaps, but making sense is not part of an artist’s job description.  In my case, it rarely is.  You’re welcome.  But, getting back to the buddha/boddhisatva question, the answer is I don’t know.  Maybe we can ask the music teacher when she’s in a better mood, but I think this is as good as it gets.