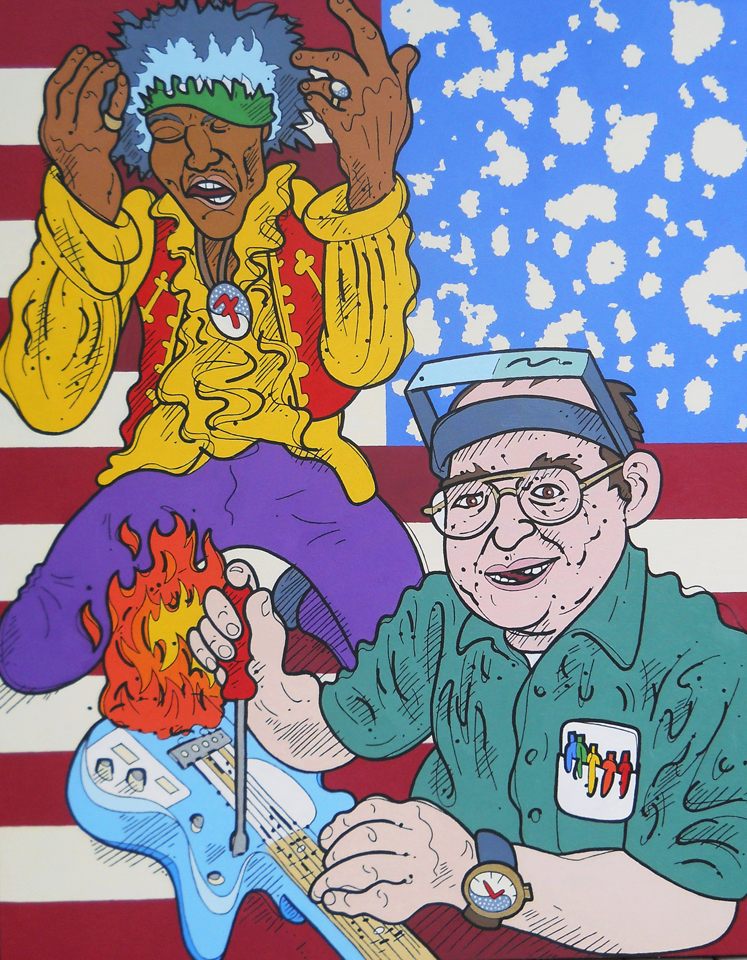 Music is going to break the way because music is a spiritual thing of its own.  You can’t just cut out the perfect wave and take it home with you.

In “Fender Bender”, Jimi Hendrix becomes a supporting character in his own painting by being upstaged by his instrument, which in turn is upstaged by its designer and builder, Leo Fender, a simple radio repairman who didn’t even like loud music.  He lost his hearing in one ear while trying to fix an amplifier for surf-guitar legend Dick Dale.  Dick Dale strung his guitar by losing the B and E strings, moving the other 4 up, and adding D and G bass strings.  His strings were so tight that he broke a lot of picks when he played.  He had a pick dispenser mounted to his guitar so that he could toss his broken picks into the crown and replace them without missing a beat.

With a nod toward 60s counter-culture and the blue-collar patriotism of the times, I painted into the background of Fender Bender a semblance of an American flag (with 50 stars – count ‘em and weep), shown here in the TV-friendly off-shades of red, white and blue that are used in televised political conventions.  Jimi Hendrix’s guitar-burning occurred at the Monterey Pop Festival, the flag is Hendrix’s “Star Spangled Banner” at Woodstock, and those two concerts roughly bracketed Hendrix’s few years of fame.

Where’s the next Hendrix?  Where’s the next Jesus?  They’re probably already here, so keep your eyes, ears and mind open.  But remember this: a fire cannot burn the same way twice, because fires don’t burn twice.