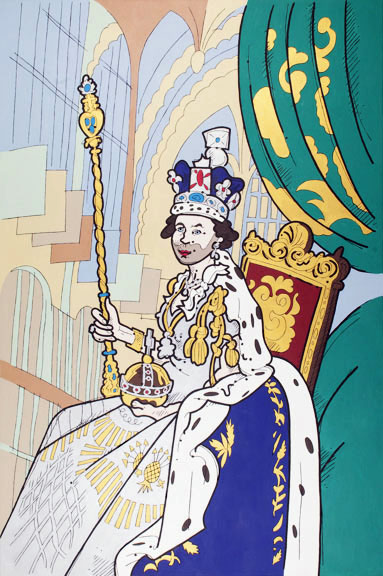 Why say the poet and prophet are not often united?  For if they are not they ought to be.     – J.M.W. Turner

When I was little, I had a dream that was so vivid it still seems like some sort of reality leak than an ordinary dream, in which I was in Westminster Cathedral – great seats, too — witnessing Queen Elizabeth’s coronation.  I remember noting that she seemed barely older than my baby sitter.  Years later I visited England, and through conversation I became aware of an imbalance existing there between the sexes, in the workplace, in society and in politics.  I had to ask, how does that explain Maggie Thatcher?  I was informed that Maggie Thatcher is not a woman; that she’s really a man.  Oh … okay.  But I’ll never let that dampen my love for her.  We’ve come too far for that, right Meg?

So, I painted this portrait of the queen (“a pretty nice girl”) sitting in what must be Westminster’s Silly Room, judging from the weird perspective and Martha Stewart colors.  It’s a good thing.  The 5-o’clock shadow and the title were an afterthought, a point an art critic in Indianianapolis once missed when he panned me for wasting his precious time and scantily clad brain cells by mindlessly illustrating a grade-school level pun.  He obviously didn’t have the time or telephone privileges to call me and confirm his lazy-assed opinion, either.  If his finger was broke, he could have dialed the phone with his elbow, or had his mother dial for him.  I’ll not mention the paper’s name, so as not to embarrass myself, but it started printing in 1903, and they still think Teddy Roosevelt is the president.  Their masthead quotes 2 Corinthians 3:17, “Where the spirit of the Lord is, there is liberty,” which contradicts the beliefs and actions of many of their readers.