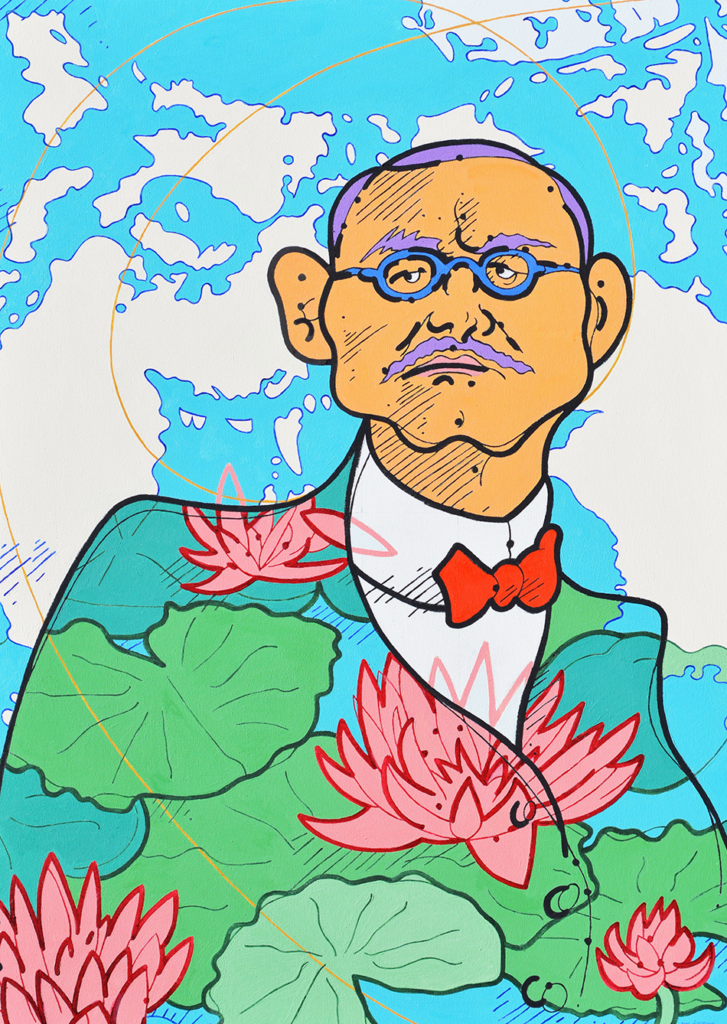 I have ceased to question stars and books;  I have begun to listen to the teaching my blood whispers to me.     – Herman Hesse

I have read Herman Hesse’s thinnest book, Siddhartha, represented here in Herman’s Big Adventure through the liberal use of waterlilies.  From another book of his, I painted in the sky the Steppenwolf, borrowing iconic album art of the 1960s band of the same name.  (Like a true nature’s child, he was born to be wild.)  These visuals serve as background and foreground, and their roles and boundaries are uncertain, as they run together and occupy space both in front of and behind the subject.

The Golden Proportion, also referred to as the Golden Ratio, has been observed in nature and used in art and architecture forever.  The exact ratio is .618034 to 1.00.   I always thought that that was simply our natural visual field, which is why it feels so normal to us, and I thought George Eastman thought so too.   Therefore, I also thought the Ratio cannot work in a vertical format.  I have in the past been the Golden Proportion’s biggest critic, usually dismissing it as coincidence, but my draftsmanship in Herman’s Big Adventure revealed to me that the eccentric composition I intuited in this painting almost precisely matches the science of the Golden Proportion.  I celebrate this with a gold spiral, arcing across the painting with friendly German precision.  A little torsion now and then never hurts.

Do you like his tie?  Who else has a tie like that?  Peewee Herman perhaps?  As in Peewee’s Big Adventure?  Again, is it plan, tendency or coincidence?  I don’t know — that’s why I’m asking you.   As I’ve never said before, some get the calling but others get the itch.