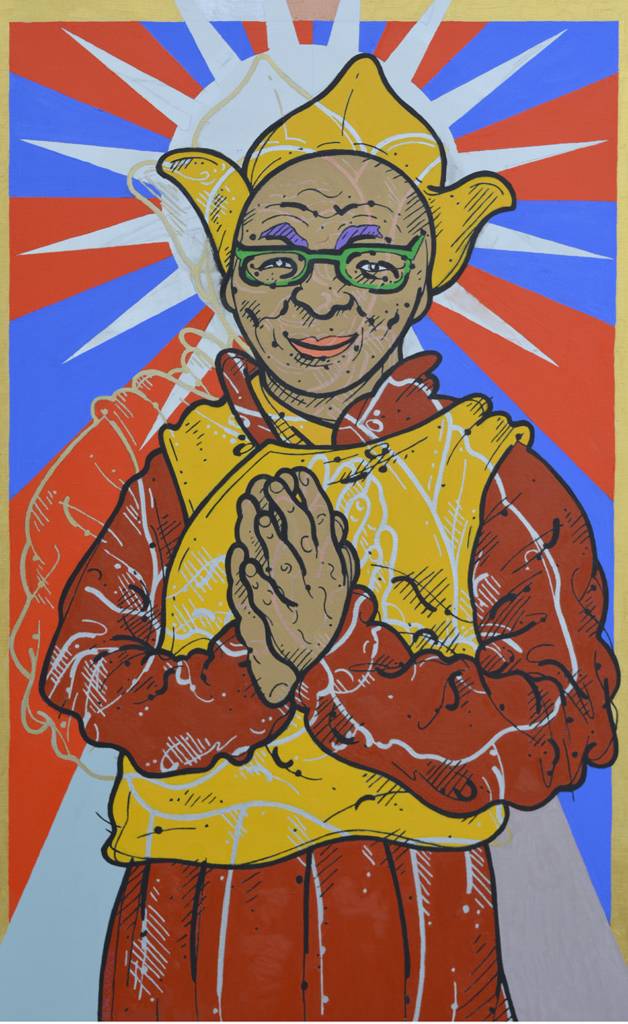 There is no need for temples; no need for complicated philosophy.  Our own brain, our own heart is our temple; my philosophy is kindness. – the Dalai Lama

His Holiness the 14th Dalai Lama (Tenzing Gyatso) is depicted here in his maturity but as wearing the vestments of a very young Tibetan monk.  He was identified as being the Heir to the title of Dalai Lama at age 2, following a series of tests and hunches, but he actually led Tibet only after they faced their direst challenge when he was 15.  As secular leader, he and his brother the secretary-of-state (age 17) traveled to Beijing to plead Tibet’s case for independence before Mao Zedong and his brains, Zhou Enlai.  For perspective, when I was 15 my biggest worry was how I can sneak soiled clothing into the washer without my mother knowing.  But there is no perspective in this painting.  Maybe a little.  If you spot some, thangka for noticing, though I’m sure you’re wrong.

The double line-work describes a double He, with one on the outside and one on the inside, one before and one behind, one above and one below.  There is never just one of anything, and there are always two, but they’re both the same thing.  Trust me when I say that – I’m a Gemini.  The double linework also refers to 14’s dual role as both religious leader and secular leader of his troubled nation.

The center of the painting is anchored by the Dalai Lama’s heart and praying hands.  His slightly eccentric attitude suggests his unbiased attentiveness and his capacity for playfulness.   He is buttressed on both sides by the Himalayas.  In the background, Tibet’s flag is depicted, complete with its three gold borders with one missing.  This gesture is a three-sided embrace of their Buddhism, but with one side left open to accept whatever else there may be.  Imagine acceptance as a country’s policy.  It’s easy if you try.