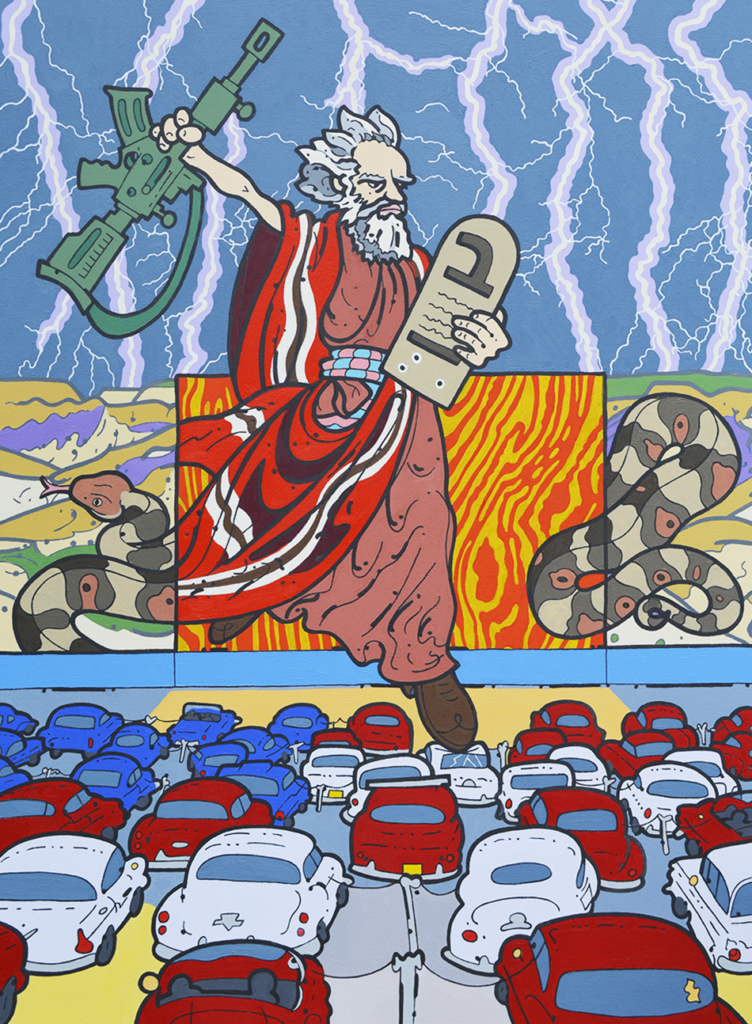 I’ll give you my gun when you pry it from my cold, dead hands.  – Charlton Heston  (on the first anniversary of the Columbine massacre)

Heston, we have a problem.  This painting began as Charlton Heston in his NRA* leadership role, brandishing an assault rifle, while also playing his signature movie role as Moses and carrying not the Ten Commandments, but rather the Second Amendment of the U.S. Constitution, which briefly and vaguely outlined our right to bear the Second Amendment of the Constitution two-and-a-half centuries ago.

Then occurred the awful murder of 11 worshipers at The Tree of Life – Or L’Simcha in my hometown of Pittsburgh, in 2018, during Shabbat services.   As usual, all the NRA did was dig in their cowboy boot heels on the issues of firearm ownership and regulation.  Their only cure is to arm everyone.  They have no plan B, C, D or F.  This painting evolved from there.   Or Stevolved, if you don’t believe in evolution.  And, since it’s a religious painting, I had no qualms about putting extra time into it.

Compositionally, you’ll notice that the painting is divided into three horizontal bands created by two overlapping squares, with all sorts of exciting activity crammed within.  Perspective is rolled flat, like Chinese landscape painting, or a Grandma Moses painting.  Of her own work, G.M. said “I paint from the top down.  First the sky, then the mountains, then the hills, then the cattle, then the people,” in a top-to-bottom hierarchy.  But unlike me, she never painted a religious subject, insisting that she “would not paint something we know nothing about”.  Speak for yourself, G.M.!

*not to be confused with the short-lived Depression-era National Recovery Administration, which was headed by General Hugh S. “Ironpants” Johnson, who didn’t want the job anyhow.  He was called Ironpants because he ironed his pants, I guess.  He later supervised WPA projects in New York City while working for another Moses – Robert Moses.  See how history gets all stuck together?