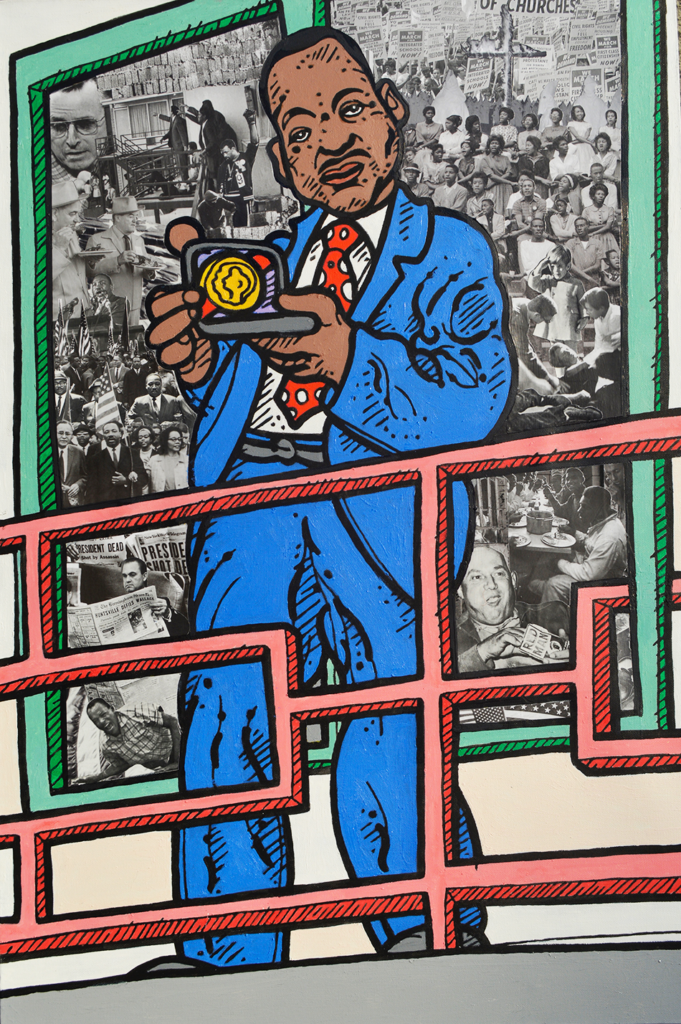 “Human salvation lies in the hands of the creatively maladjusted.” — Martin Luther King

The subject himself inspired much of what I think and feel and do, and this painting is a subset of that.  Martin Luther King, Jr. stands on the balcony of the Lorraine Motel in Memphis at the time and place of his violent death, as he proudly displays the Nobel Peace Prize that he earned for his brave and diligent work for civil rights.  See how we are?  Can you see a pattern?

The painting is small and was painted in water-based oil paint, as were many of the small-space works I did when I was in Hong Kong, but it was never shown.  I felt the painting deserved better craft so 7 years later I over-painted most of it and added the collage in the windows.

The use of collage is a 1960s thing, when magazine photographers were always on the scene and the media was supplying not only the relevant themes but also the means for discussing them.  I have always been a builder of collages, the real gas being the novel combinations of mass-produced imagery to say something more or different.  It doesn’t hurt that I have a soft spot for surrealism.

I credit the African-American artist Romare Beardon with inspiring me to mix paint and paper in this composition, which is nothing new in art, but it did indicate Beardon’s early pop sensibilities and feelings of social responsibility, from his early days as a participant in the Harlem Renaissance, through the Depression, the War years, the Jim Crow ‘50s, all the way through the Civil Rights years of the 1960s.  He was present.