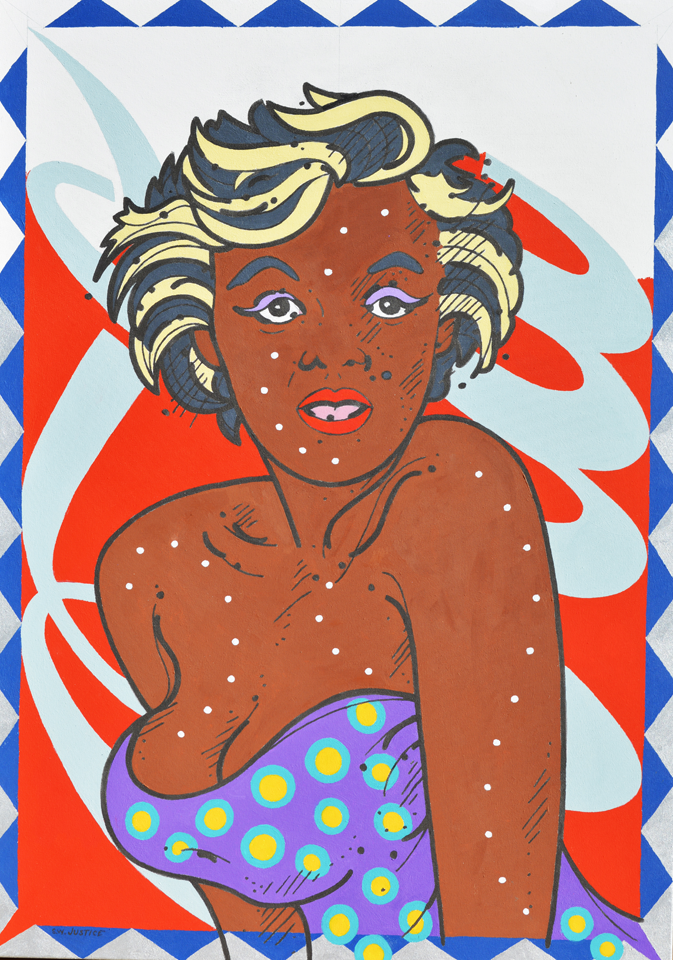 Imperfection is beauty, madness is genius and it’s better to be absolutely ridiculous than absolutely boring.     – Marilyn Monroe

I have learned a lot about the politics and culture of Africa in general, and Mali in particular, through their fabulous, spiritual music, both as recorded and in Hong Kong nightclubs.  “Marilyn Monrovia” is an exploration of Western and African beauty standards.  Depicted here is evidence of colonization and globalization, looming unfinished (or eroded) on the wall behind.  The red might also refer to China’s African agenda.  Besides being a girl’s best friend, the decorative, metallic diamonds along the border also refer to the mineral (and general) exploitation of Africa.

About the title: Monrovia is the capital of Liberia.  Liberia did everything they could to please the US, including copying our flag and naming their capital Monrovia after a well-known American shock absorber company.  They were basically declaring colonial relations with the US in order to keep our European counterparts from declaring colonial relations with them.  The US was not particularly interested in Liberia, but we weren’t about to turn down a free colony.  Besides, some Americans ignorantly considered Liberia to be an attractive destination for the re-exportation of African Americans once they outgrew their usefulness as slaves.  Without consulting Liberia about the scheme, of course.  What the hell – they wouldn’t mind.

As one South Sudanese model put it, “True beauty is born through our actions and aspirations and in the kindness we offer others.  Beauty should not be culturally relevant.  It should be universal.”  She’s right — beauty standards can co-exist.  Why not? Who’s to lose?  Nothing gained, nothing lost, and nothing wasted, nothing gained.  Everybody wins, you see.  Except those who don’t hang on my every word.  Go ahead, do it – hang on my every word.  I won’t step on your fingers.  I promise.