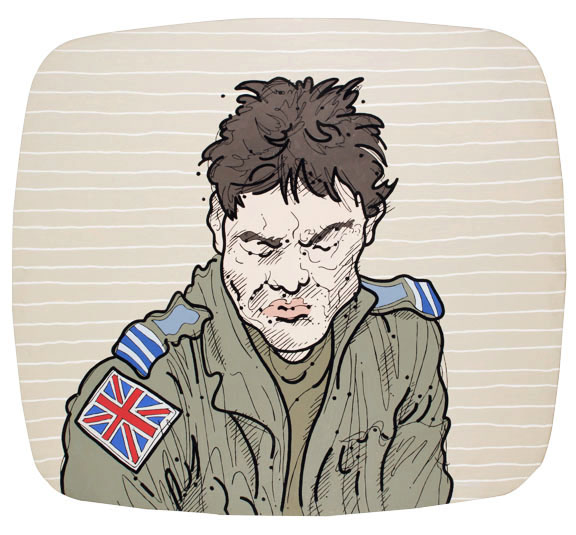 … I wasn’t trying.  That’s the difference.  That’s not the difference.  The best work I do is when I don’t think about it too much, and I just allow whatever instinct to take the driver’s seat and just write and not be freaked out about that and let it be what it is.  The stuff comes out, it goes with the music, I toy around with it a little bit and it works.  And then I go about interpreting the work myself.  What does it mean?  Once I figure that out, then it’s for everyone.     – Michael Stipe  (Steve Dollar interview, 6/01 Stomp and Stammer)

The aptly named “Oil on Canvas” (both title and medium) shows John Peters, the unfortunate British airman who was captured and flaunted on world television by Iraq at the beginning of the first Gulf war in 1991.

This painting has been exhibited only once, in a “Response to War” show in Athens, Georgia.  In the same exhibition, Michael Stipe of the alt-rock band R.E.M. showed a black-and-white photograph he took of a two-story frame house.  Or maybe the house was three stories.  I can’t remember, but that’s another story.   What I always wondered was how his photo qualified as being a response to war.

But that’s him in the spot-light, losing his religion.