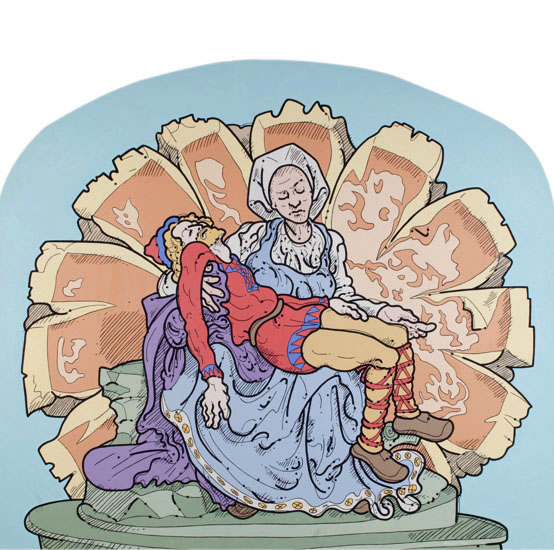 A song works across time the way a painting works across space … The song tells me what to do.  The less my brain is involved, the more I trust the music.  Often, I don’t know what the song is about until after it’s done, and not even always then.     – Jean Sibelius

This collision of earth and sky myths (Nordic pagan and Catholic Christian) was inspired after seeing Michelangelo’s delicate, so seemingly lighter-than-air Pieta in Rome, and then seeing in Helsinki a rigidly-posed attempt to reproduce that masterpiece, that someone had whittled from a couple birch logs and painted with the tail of a wolverine.

The New Testament and Finland’s Kalevala mythology serve as the distorted mirror texts that spawned this comment on a mother’s love and forgiveness.  Jesus and Lemminkainen were both mama’s boys who ran afoul, died and were reborn, each in his/His own way.  Jesus rode into Jerusalem, then things went all screwy, with unfortunate results.  The feisty hunter Lemminkainen defied his mother Kyllikki’s advice and unsuccessfully fought a monster in the waters of Tuonela.  Both mothers grieved and forgave — Lemminkainen was re-assembled and Jesus was reborn, to live on for only three more days.

A bunch of superstitious hooey generated by ignorant peasants to pass the time you say?  Would you say that if you learned that Finns believed the world emerged from a duck’s egg?  Or that our God-man molded the earth from a mud-ball and set it a-twirl?  I think the truth is somewhere between.

This canvas takes its shape to suggest that it might have been “liberated” from a church in war-torn Europe.  Jesus–Lemminkainen and Mary—Kyllikki both wear traditional Finnish costumes in this painting.

Pieta Kalevala was also informed by the moving first movement of Henryck Gorecki’s Third Symphony (“Songs of Sorrow”), about mothers losing children.  (The bass strings sob for the first 10 minutes, then the soprano Dawn Upshaw finishes you off.  Listen and weep.)