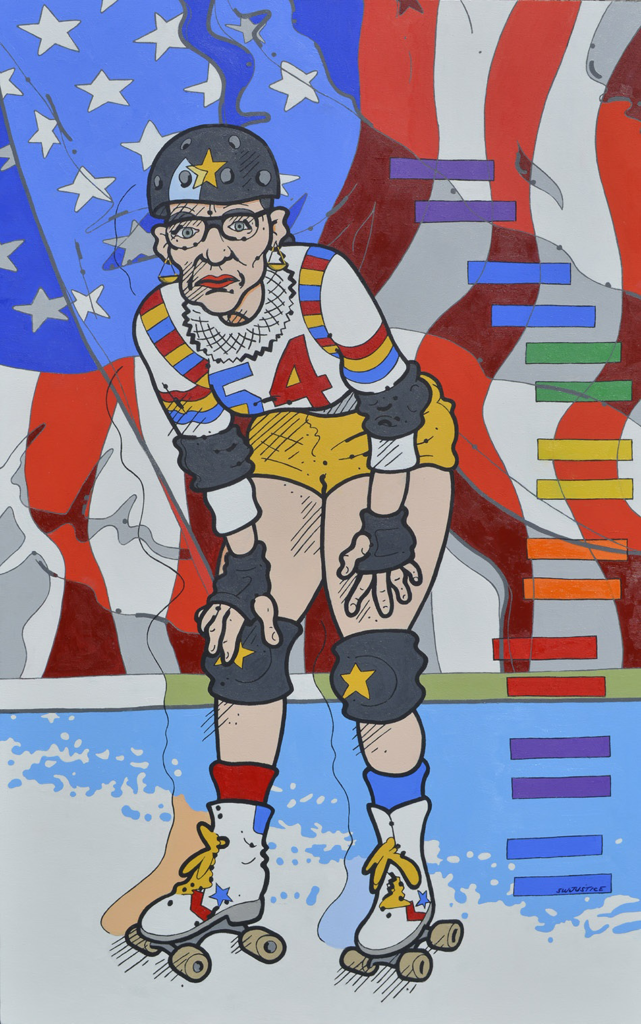 Fight for the things that you care about, but do it in a way that will lead others to follow you.     – Ruth Bader Ginsberg

I don’t know what I can tell you about this painting that I don’t already know.  I am (and you may also be) a fan of the fiery woman who became the second female U.S. Supreme Court justice, Ruth Bader Ginsberg, who argued against gender discrimination in 6 landmark cases while winning recognition as being an engine of liberal dissent.  She voiced her principles and wouldn’t back down, stand down or step down, and we are all the beneficiaries.

Her roll as a Roller Derby Queen in this painting reflects her competitiveness, and the Star-Spangled Banner behind her, as well as the United Skates on America on her feet, symbolize the country she loved.  The 54 on her uniform might refer to her year of graduation from Cornell, but it also carries the suggestion of a 5-4 Supreme Court decision.  The “speed lines” behind her (to the right) are an ancient comic strip gimmick used to suggest movement of an otherwise stationary object or person.  Think of Sluggo chasing an ice cream truck.  These lines I turn into “equality” symbols, like those the ACLU uses, here paired into colors of diversity.  (Btw, RBG co-founded the ACLU’s Women’s Rights Project in 1972.)

RBG’s pose and detailing were inspired by a photo of Joannie Weston, aka the “Blonde Bomber”, a real Queen of the Roller Derby who rolled for the San Francisco Bay Bombers.  Joannie once hit 8 home runs in a college softball game.  (Her team must have scored at least 24 runs in this game.)

The first thing that happened when I posted this painting on the fridge was,  dozens of roller derbiers came out of the woodwork, all aclamor with purchase inquiries.  And I’d better accommodate them because there probably isn’t a one of them who couldn’t beat me to within an inch of my wife.