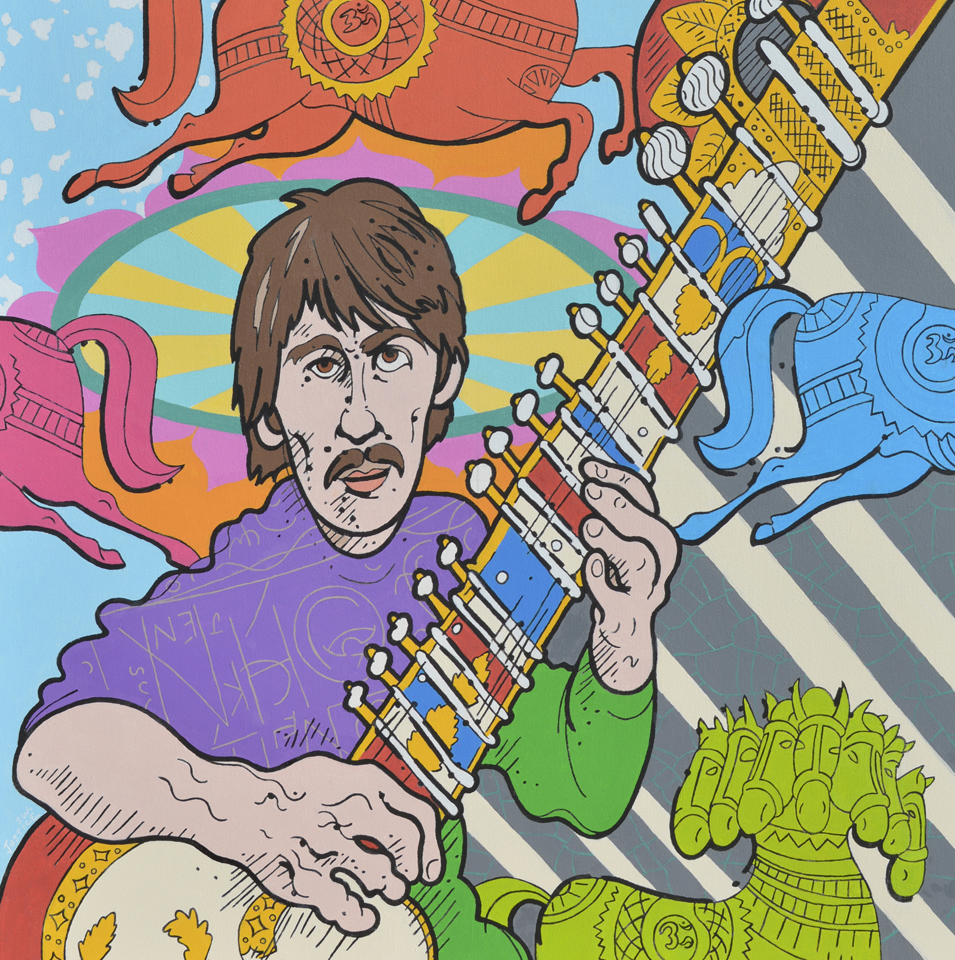 I think people who truly live a life in music are telling the world, ‘You can have my love, you can have my smiles.’  Forget the bad parts, you don’t need them.  Just take the music, the goodness, because it’s the very best, and it’s the part I give willingly.     – George Harrison

This painting was a practice piece, which is why I name it using the musical term ‘etude’.   (Whistler also named paintings using such musical terms.)  At the time I painted this, I was limited in movement and strength after I broke a couple ribs on the 4th day of the Tour de France, so I was taking it easy.  My objective here was to honor George Harrison while cramming as much Beatle arcana into the painting as it could hold.

I became conscious of the Beatles one evening when I was 9 when I hid from our sitter, Becky Bronco, and overheard, on one of her TV shows, their song “We Can Work It Out”.  It did not sound like any normal love song I’d heard before, with its doubts and insecurities, the chopping rhythm, the keyboard that drones like a broken toy Eminee organ, and that weird bridge with John Lennon speaking as the voice of reason.  Until then I didn’t know music was allowed to sound like that.  I was hooked.

George and Ringo were 20% partners in the deal.  (30% went to John and Paul.)  I have always felt a kinship with the self-described ‘Dark Horse’ George Harrison, with his work ethic, mysticism and quiet inspiration.  Rich, famous, young and bored, he explored Imperial England’s backwash and discovered the sitar, which he employed to help introduce Eastern music to the Western world.

I compressed my original sketch into a square format to suggest the distorted album art of the times, such as the Beatles’ own “Rubber Soul”.  The chaos and my colours were inspired by a visit to India and from classical Indian storybook illustration.

Note:  My subtitle “Eight Hooves to Hold Me” refers to the Beatles’ movie “HELP!” subtitle, “Eight Arms to Hold Me.”