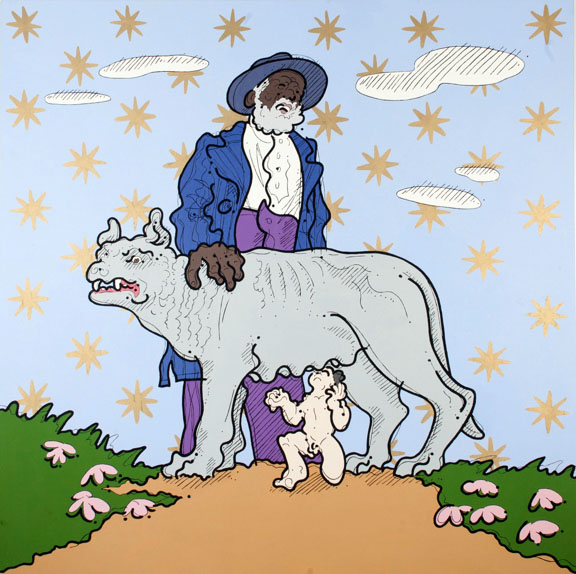 When you’ve got a thing to say, Say it! Don’t take half a day.

When your tale’s got little in it, Crowd the whole thing in a minute!

With a tale which, in a pinch, Could be cornered in an inch!

Boil her down until she simmers, Polish her until she glimmers

If you attempt this at home, make sure you pet the she-wolf first.

“Romulus and Remus” is rare for me in that it was as title-driven as it was image-driven.  Usually, it’s image first.  This is another of my ash-ups involving the classic and modern myths of two different cultures (taste notwithstanding).

Romulus and Remus suckled the she-wolf and founded Rome, probably in that order.  Imagine the civic embarrassment.  Joel Chandler Harris recorded/ adapted/ invented tales as told by a sharecropper named Uncle Remus, which Disney committed to an animated feature film that they are so proud of that it has never been re-aired or reproduced on video or DVD.  It now exists only as a Disneyland attraction so removed from its original context that no one even questions why there would be a log flume in the Cotton Belt.

Here I also float the possibility that the black man is the original man, in spite of his relegation over time.  Some believe that there was originally only one, dark race as recently as 50,000 years ago.  Which does not explain Barry Manilow.

The past is not what it used to be.