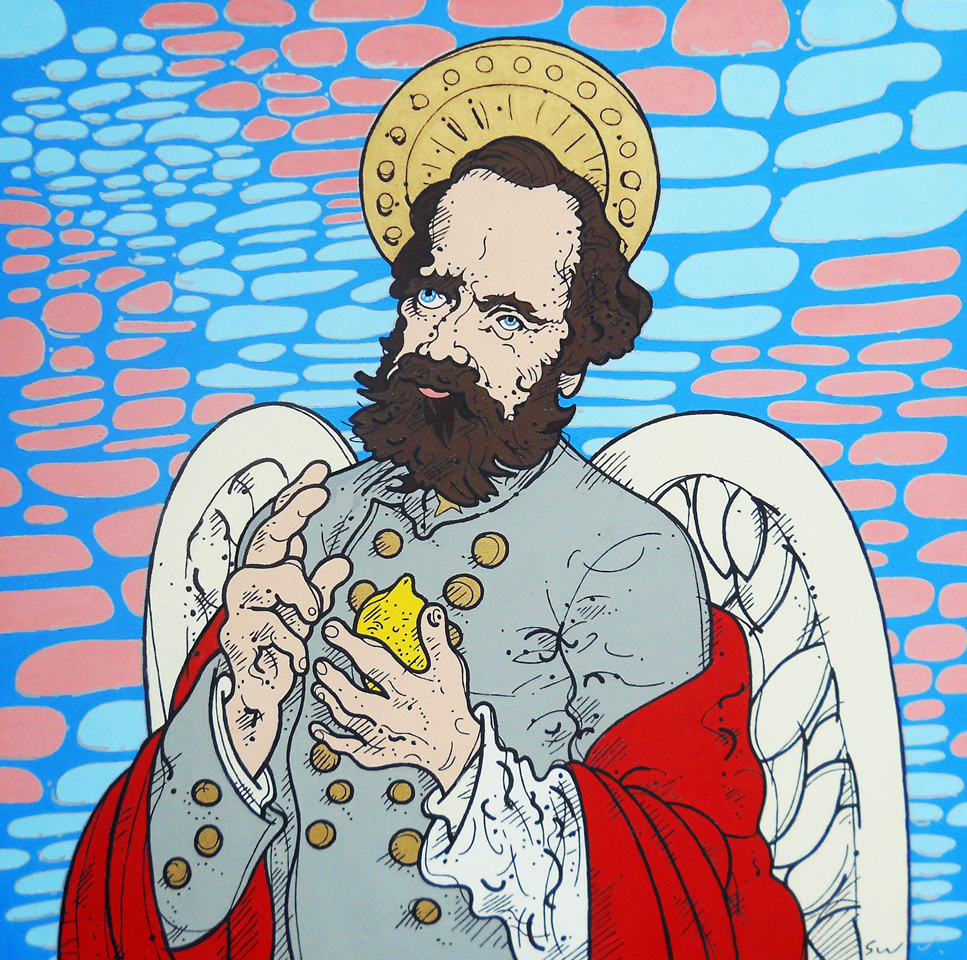 My ancestors fought in the Civil War for the Virginia (West Virginia) Volunteers, who represented the North and got their asses kicked up and down the Shenandoah Valley by the crafty, unpredictable tactician, Rebel holy man, and poster-boy for the Lost Cause, Thomas “Stonewall” Jackson, here mockingly deified in Christ-pose with a heart of lemon (which was his favorite snack, and I reckon hard to come by in the mid-19th century), and the red robe, wings, and halo customarily assigned to saints in such situations.   Those on the losing end of this futile rebellion actually thought that highly of him.  Many of his fans still make that mistake, after 160 years.

The eyesore known as the battle flag of the secession states is subtly suggested in the faded, stonewall-like clouds in the sky.  Stonewall’s missing button is a reference to a tale in which one was removed by him as a souvenir for a young girl named Girl.  Her brother, Mordechai, got to keep Stonewall’s baseball mitt, which was useless to the general after he lost his arm, but I’m getting ahead of myself.

Jackson was killed by friendly fire (yeah, real fucking friendly) about halfway through the war, at the Battle of Chancellorsville in 1863, which he won for Lee through a staggering display of creative generalship.  His army of 14,000 tiptoed, undetected, around “Fighting Joe” Hooker’s camps at night (you try walking 13 miles through mud and horseshit on tip-toe) and undertook the mother of all panty raids.  Hooker was doing more drinking than fighting around that time, and his detachment of only 115,000 trained, armed, and well-rested soldiers were routed.  After he fell, Jackson’s arm was buried near Chancellorsville, but the rest of him was buried near his home in Lexington, Virginia.  His horse Sorrel is stuffed and on display at the Virginia Military Institute (VMI) museum, for inspection by anyone interested in 19th century taxidermy.