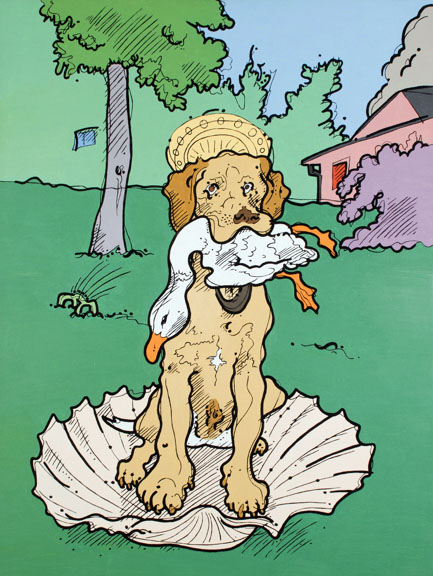 Inspiration demands the active cooperation of the intellect joined with enthusiasm, and it is under such conditions that marvelous conceptions, with all that is excellent and divine, come into being.     – Giorgio Vasari

Vince was my first dog, named after at least three Italian in-laws.  What do dogs dream about?  Are they really dreaming when we see them kicking, woofing and twitching, or as some say, is all that just some kind of general physical release?  When my dogs have awakened following a nap, I can sometimes tell that they have just been someplace else and their present whereabouts confuses them.  Dogs may know what time it is, and they know this by smell alone, but they never know what day it is.  They punch the timeclock and they don’t complain, so never betray their trust in you.

For “St. Vince”, I borrowed the half-shell from Sandro Botticelli’s “Birth of Venus” and set it afloat on bounding waves of freshly mown suburban grass.  The halo was also borrowed from Florence’s Uffizi Museum.  The smoke seen coming from my neighbor’s house represents smoke coming from my neighbor’s house, an actual event and a David Lynchian “Blue Velvet” touch in the otherwise serene Middle American Columbus Ohio.  (The damage was minor and no-one was hurt.)