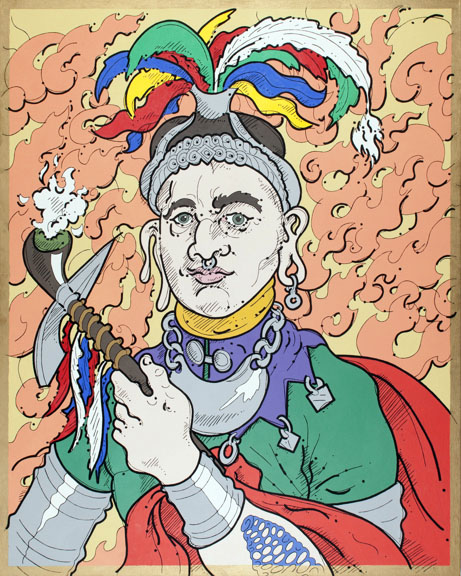 There is no easy way from earth to the stars.   – Seneca

In what on the surface might be mistaken as another cloud of so much New Age psychobabble (quoting an ancient Stoic doesn’t help my case), “Seneca Sutra” is an experiment in combining Western Indian and Eastern Indian elements in the same painting.  I decided that I would accept, as the outcome, the process rather than the product, and did I ever.  I pretty much had to.

The Native American subject of this painting is Cornplanter, the great and powerful Seneca war chief.  The Western Door, as the Seneca were called, was responsible for Haudenosaunee (Iroquois League) dealings with Ohio and beyond, and they were badder than the whole rest of the League combined.  They once tracked down and exterminated the entire Erie Indian tribe because the Eries had abetted fugitives from Seneca law.  There are no Erie Indians today.  Other Great Lakes tribes like the Sauk, Fox and Potawatomie the Seneca bulldozed further West, and this too included the Lakota, who remained friends with and bought guns from the French in the East, while acquiring horses from the Pawnee and the Spanish to the West, and became the formidable mounted warriors that they were.  The Seneca also had the audacity to sell Ohio, which was Shawnee land, to the US government.  It was not theirs to sell, but the Western Door swung both ways then, and it hit lots of people on the ass on their way out.  As they knew, you’re either on Turtle Island or you’re not.

In this painting, I use Himalayan mural colors, with flames of war doubling as flames of dharma, behind the warrior chief Cornplanter.  His feathers are the colors of prayer flags.

Cornplanter rests in a cemetery that was moved from the Allegheny River valley to higher ground when the valley was flooded to create Kinzua Reservoir.  He has an imposing monument, but all around him lie hundreds of Senecas with gravestones that read “Unknown”.