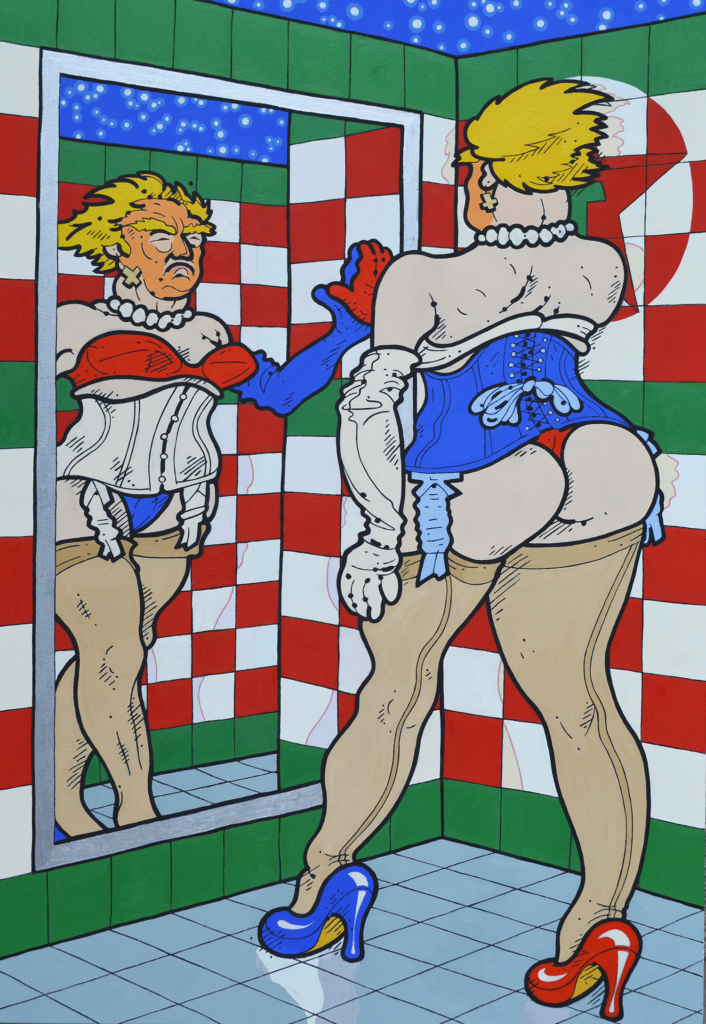 This is not a portrait of former President Donald Trump.  I would never disgrace (one of his favorite words when he scolds) Him in such a way.  There is no shortage of ways with which to disgrace Him.  He suggests so many that it is difficult to keep up with His pace.

Regardless of the theme, I hope that the viewer has as much fun seeing any painting of mine as I had painting it.  I call this Tickle-down Economics.  So here is rendered Roscoe “Fatty” Arbuckle, playing the part of Trump in the 1918 sex romp “Fat men & Flat Women”, which, unfortunately, is now lost to posteriority.

In this painting, Fatty vexes the Texaco night manager at Exit 45 by disappearing with the bathroom key for an hour and a half.  Which bathroom has He blessed with His presence, the Men’s or Women’s?  Whichever was available.  You know He’s not a patient man.

The “Girl Before a Mirror” is a recurring subject in the anals of fine art, and you know Fatty, he’d rather have a mirror in front of him than the Fuhrer’s melodeum, which he dropped and broke a few years after this photograph was taken.  This made Hitler was so angry that he annexed the Sudetenland in some kind of inexplicable, displaced retaliation.  But he paid dearly for it in September, 1944’s Battle of Nancy, during which the Allies secured passage over the Moselle.  (Not to be confused with the Battle of Nancy in 1474, which ended the Burgundian Wars.)

* Fatty Arbuckle was indicted for crushing a woman half his size to death while having wild sex at a party in room 1219 of the St. Francis Hotel in San Francisco, but he was acquitted.  Fatty was charged with manslaughter, but since Virginia Rappe (that was her name) was a woman, Fatty walked.  (Or waddled.)  The jury felt that a Chicago girl should have been able to tough out a split bladder.  California is sometimes known to grade on a curve.  On Lombard Street, that’s definitely true.