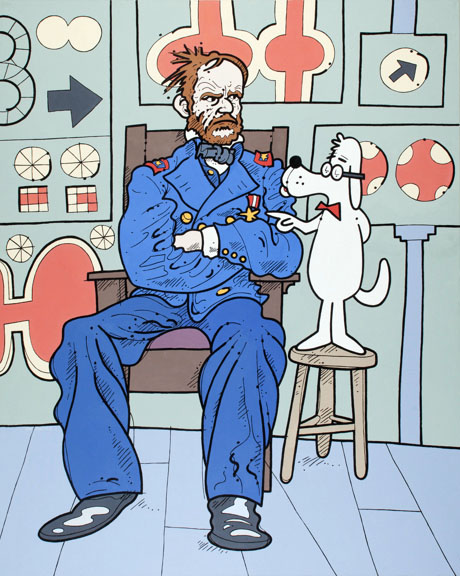 I find that I am sometimes so fascinated with painting that it amounts to pain to lay down the brush, placing me in doubt whether I had better stop now before it swallows all attention, to the neglect of my duties.  — William Tecumseh Sherman

In 1864 General William Tecumseh Sherman suckered Confederate general John Bell Hood out from a great defensive position and proceeded to wreck his army, right where you are presently standing, if you are standing near Peachtree Creek in Atlanta.  Sherman feigned to expose his flank, but then he moved a brigade overnight and plugged the hole.  The next morning Hood ordered an attack on the previously exposed flank, but ran smack into this new brigade and got trapped in the ravine.  One might say John Bell was Hood-winked.  Hood and his army fell off the map for a while, but turned up again, this time bearing down on Nashville, which was over 200 miles away, but they were so spent by then that they were easily crushed.  Sherman, meanwhile, had turned the opposite direction and was bearing down on Savannah, which was 250 miles away.  He marched with 60,000 soldiers in two parallel columns spaced 30 miles apart.  Since each column had a 15 mile reach, they cut a swath of total destruction 60 miles wide. Sherman had already confiscated 100 locomotives and 1000 railcars, which he sent to Chattanooga, and now he had a herd of 10,000 mules in tow.  Each mule = one farm tractor to today’s farmer.  Think about that.

Pictured here is a tense meeting between the seldom-patient General Sherman and the equally talkative Mr. Peabody from the “Rocky and Bullwinkle Show”, in front of Peabody’s Way-back Machine (time machine).  Sitting in for Peabody’s usual sidekick, also named Sherman, is the genuine article, Uncle Willie Sherman himself.  Unfortunately, Peabody’s observations that day were either not recorded or are lost to history, and Sherman hated losing, even if it took the form of losing observations to history.  Choose your myths wisely, my friend.