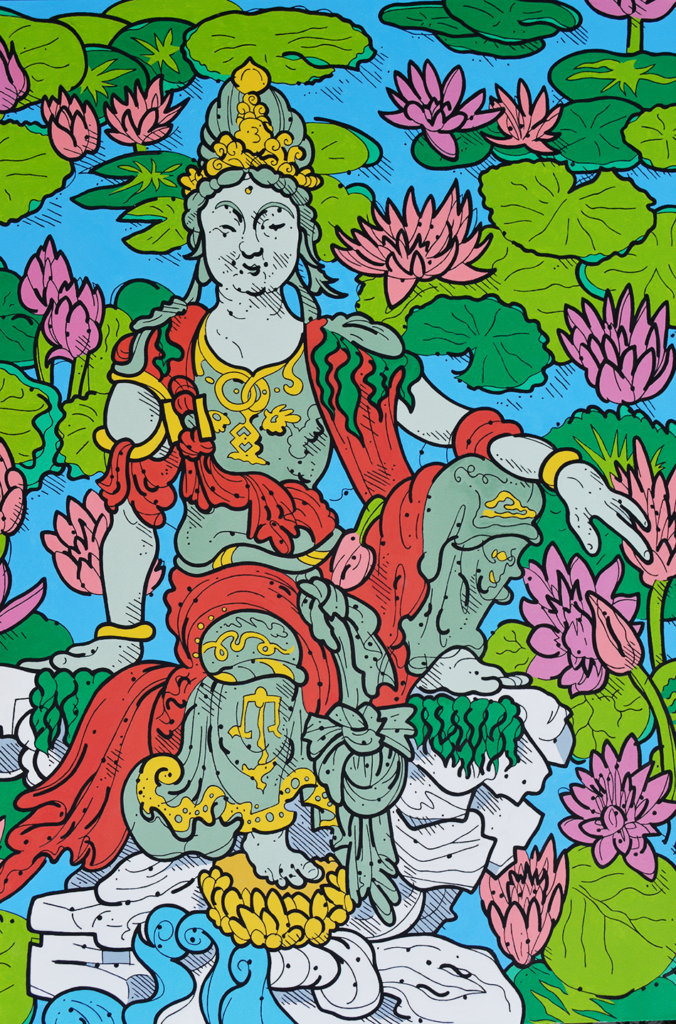 It’s true confession time, and true confessions are always better than fake confessions — those occur during plea deals on courthouse steps.  But the true truth is, the model for this painting was Guanyin, the bodhissattva of compassion, and not Tara, also the bodhisattva of compassion, as well as the mother of liberation, the savior of the suffering, and the sovereign potentate of action – which begins to sound like a ring announcer’s superlatives before a no-holds-barred ring match, which may be necessary for us to stage in order to determine which of the two is the real bodhisattva of compassion.  My money’s on Guanyin.  So, Tara, here, is actually Guanyin in green-face.  Mother, forgive me.

The Chinese statue that informed this painting has been a part of the collection of the Museum of Fine Arts in Boston, New York* since 1920.  It is thousand years old and is carved from paulownia wood.  Paulownia is the second lightest wood besides balsa, clocking in at 1/3 the weight of oak and 1/2 the weight of pine.  It is quite heat-resistant, with a flash point of 788 degrees (f), as compared to 572 for pine.  Paulownia wood also resists termites, insults and salt water, and will grow as tall as your daddy by its first birthday.

The difference between a buddha and a bodhisattva is a buddha has attained enlightenment, whereas a bodhisattva foregoes her/his quest for the same until the rest of us achieve ours.  How’s that for selflessness?  So, the bodhisattva’s m.o. is to help us to shed our layers of attachments, ignorance, and anger, to ultimately become awakened.   The challenge then is to stay awakened, and all the coffee in Sumatra could never come close to being as effective at that as a Chinese boddhissattva.  Sumatra’s only 2% Buddhist anyhow.