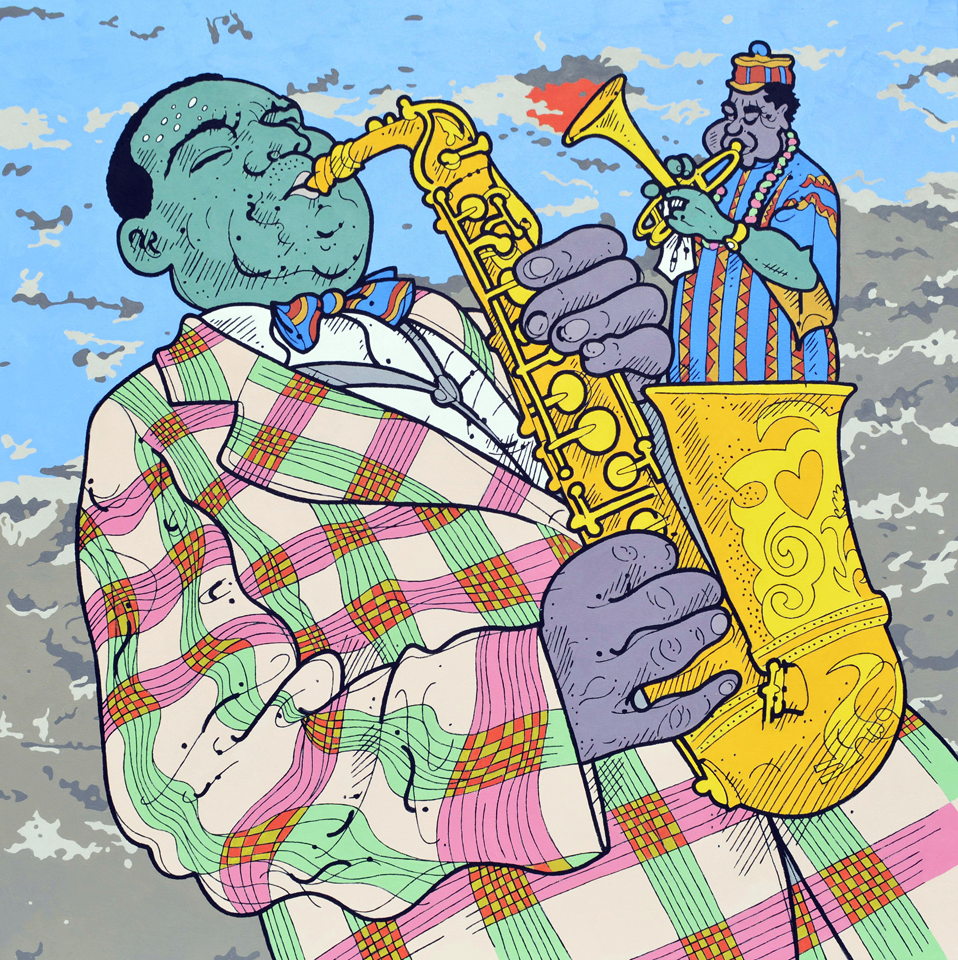 Music is your own experience, your thoughts, your wisdom.  If you don’t live it, it won’t come out of your horn.  They teach you there’s a boundary line to music.  But, man, there’s no boundary line to art.  – Charlie Parker

I have always been amazed by the dazzling and maniacal music of jazz musicians such Lester Young, Bud Powell, Max Roach, Clifford Brown, Charlie Parker, and Charlie’s partner in Bop, Dizzy Gillespie.  No, I am more than amazed – I am staggered.  Maybe something between nonplussed and thunderstruck, but short of dumb-founded.  Who begat whom, Parker or Gillespie, is irrelevant, since they drank from the same rusty can, moved north, and turned their black-and-white times into mad crazy beat American technicolor jazz dreams, man.  (Kerouac lives!  If it’s between 1922 and 1969.)

The painting’s square format refers to record packaging, but the format and ragged drag-line striping may suggest a vintage vinyl floor tile, perhaps in an Uptown jazz nightclub in the 1950’s, if you’ve ever been drunk enough to observe a floor tile this closely.

Parker wears a rumpled jacket that could only come from the 50s (or a dead sportscaster), and his bowtie borrows colors from Dizzy’s dashiki and fez.  Their skin tones were inspired by a vivid party scene I read when I was a teenager, in the Harlem Renaissance scribe Langston Hughes’ debut novel “Not Without Laughter” (1930 – he was 21 and a recent college grad), where he describes flesh tones and much else in terms of rainbows of beautiful colors.

Charlie Parker was born and is buried in Kansas City, though he spent most of his working life in New York City, where he literally died laughing as he was watching a circus act on TV.  It must have been pretty funny.