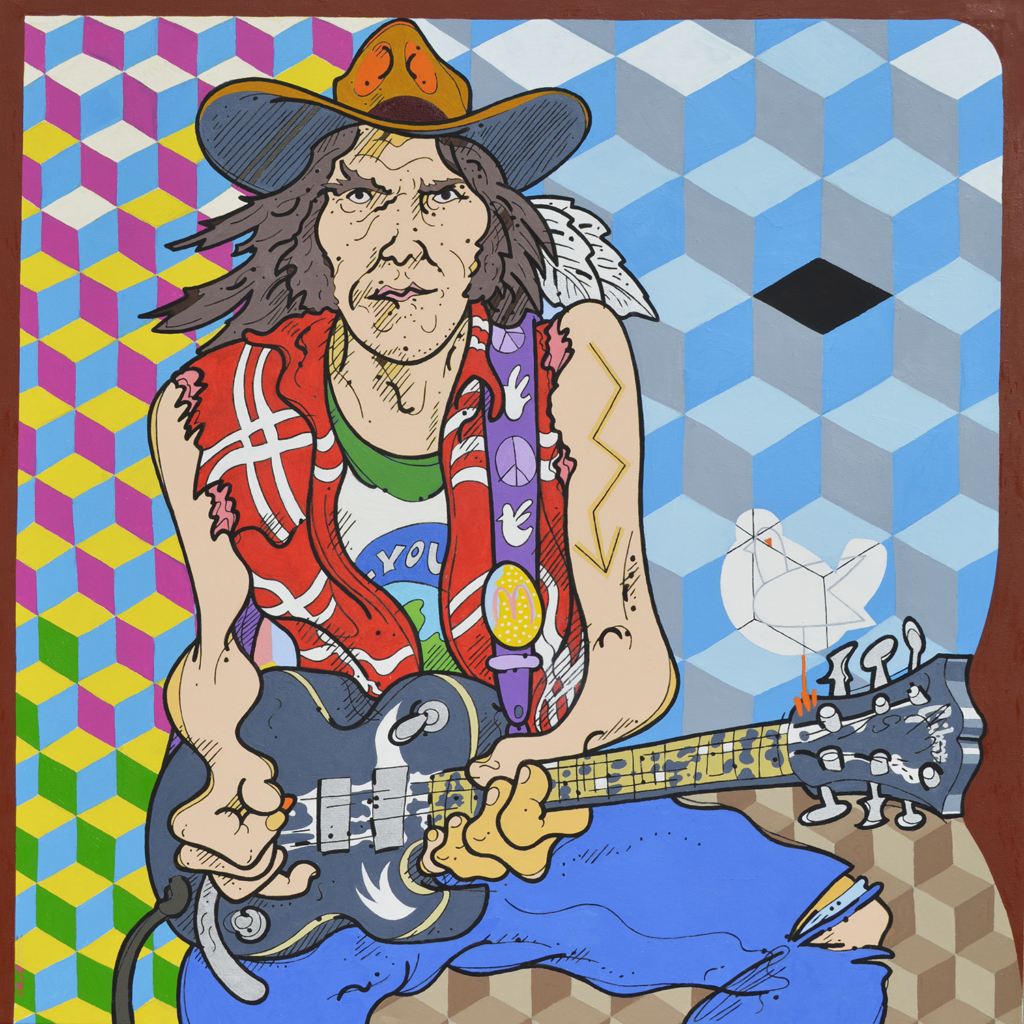 Sometimes when I’m writing a song I can feel there’s other things in me that are not me.  That’s why I hesitate to edit my songs.  If it’s something I have to think about and contrive, work at, it’s usually not that good.  My best work just comes through me.  A lot of times what comes through me is coming from somewhere else.     – Neil Young

The proficient, prolific and precocious Neil Young began his musical career in the 1960s when he was a teenager, and has come to epitomize that decade’s lost incense.  The loudest sound I’ve ever heard suggested itself when I was concussed by Neil Young and his band Crazy Horse in a small concrete bunker of a venue in Columbus, Ohio, as I sat a mere eight rows away from the virtuoso.  This painting began with that faraway look in Neil’s eyes when he takes leave of himself, turns all trebly and starts smearing a guitar solo all over the place.  It’s a beautiful mess, but I know he’s not there.  I can see it in his eyes — he’s somewhere else.  Down by the river, or lying in a burned-out basement.  Or maybe on the Cripple Creek Ferry, butting through the overhanging trees.  Or at Sugar Mountain, with the barkers and the colored balloons.  Or lying on his back in the schoolyard.  Don’t be denied.

In this painting I resisted the cliché of depicting a guitar hero with abstract, slashy and splashy brush strokes that bring to mind what I imagine Leroy Neiman’s Calvin Kleins look like.  Instead, I apply the arcane auto-biographical and anthroposophical details and tendencies that Neil himself might use, including, here, a classic Americana decorative motif in the background (cube quilts, Whitehall glass & c.), in this case tinted as the Saskachawanian sky, old-time sepia and psychedelia.  The various bird symbols derive from his life and art.  The primitive bird imposed over the Woodstock dove is from an ancient petroglyph I saw near Jackson, Ohio.  I’m pretty sure its copyright has expired by now.