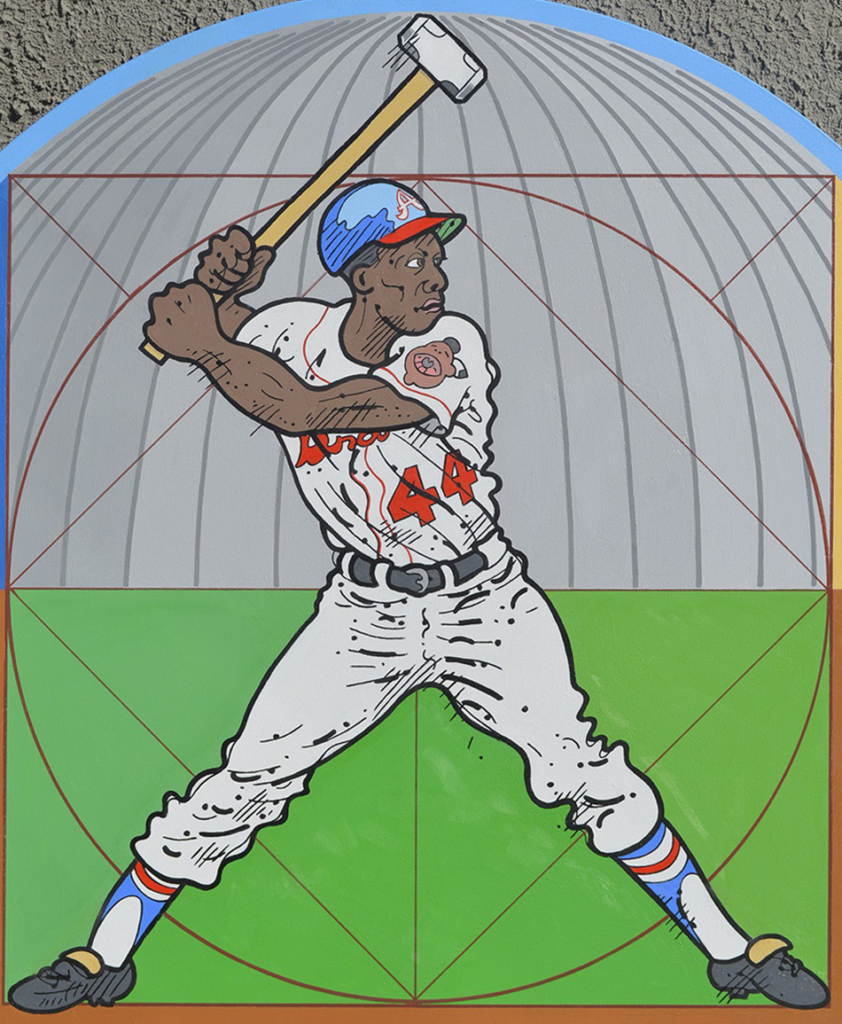 On the field, blacks have been able to be super giants.  But, once our playing days are over, this is the end of it and we go back to the back of the bus again.     – Henry Aaron

Roman designer and architect Marcus Vitruvius Pollio wrote a book on architecture, which was reprinted 15 centuries later and inspired countless Renaissance artists and architects, including Leonardo da Vinci, who became intrigued by the relationship between man and earth and based much of his work on Vitruvian analogies.  “All the arts and all the world’s rules are devised from a well-composed and proportioned human body,” wrote Francesco di Giorgio, who is not shown in this painting and who I won’t mention again.  Leonardo’s notes on his Vitruvian Man drawing are, as usual, written backwards (from right to left) not because he wanted to stump the reader, as is rumored – any jackass could crack that code – but because he was left-handed and he was tired of smearing ink around with his writing hand.

Henry Aaron was right-handed, and was arguably the best hitter of that persuasion in Big League history.  He was also the Negro League’s greatest product who made the Majors.  Aaron began his pro career in 1951 at the age of 17, with the Indianapolis Clowns.  They weren’t exactly clowns, though they were not averse to novelty.  They had a midget on the roster called Spec Bebop, and an excellent 2nd– basewoman named Toni Stone, who took Aaron’s place after his change of employers. He Northernly Migrated to Milwaukee to play outfield for the Braves, only to move South again when they became the Atlanta Braves.  He continued to work his magic and make baseball history there despite receiving something like 20,000 death threats a day.  (* That might be an exaggeration, but 2,000 might not be.)  So here he is, playing the part of Leonardo da Vinci’s perfect man, taking his hacks in front of Georgia’s famous landmark, Stone Mountain, prior to its grotesque disfiguration.