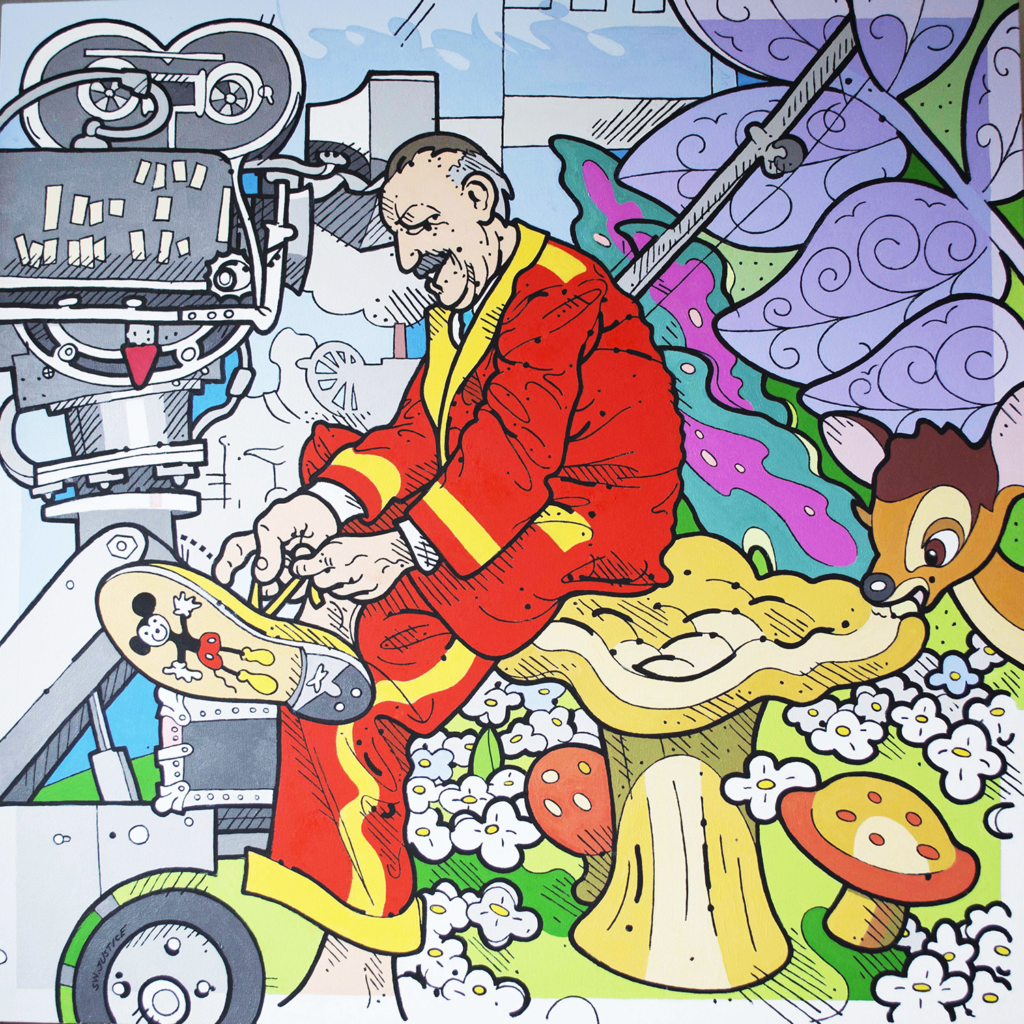 I know that life isn’t a World’s Fair of delights, but I think it should be and I hope it will be.    – Walt Disney

Contrary to popular belief, Walt Disney’s body is not cryogenically frozen.  That’s just a bourbon legend.  He was cremated and his ashes were taken to Burbank to be broadcast by NBC through its affiliates.

We didn’t have Mr. Rogers, Sesame Street, and John Hughes movies when I grew up.  I was raised on and by Walt Disney, everybody’s uncle, whose theme song began, “The world is a carousel of color …”   I became so oversaturated and drunk with Walt Disney, that all his mastery, and even some mistakes, occupies an oversized dumpster in the back of my brain.

“… History, comedy, fantasy,” the song continues.  In this animation cel-like cartoon within a cartoon, Walt Disney may or may not be filming one of his fantasies.  I borrowed a few moves from some of Disney’s feature-length cartoons in this painting, such as Alice in Wonderland and Bambi, and the red-and-yellow band uniform Mickey wore on the Mickey Mouse Club.  But weren’t red and yellow also the colors of communism, which Walt railed against in the 1950s?   And wasn’t “Bambi” banned in Nazi Germany, under the belief it would weaken children?  See where this is going?  I sure don’t.

I have an early memory of getting up the courage to approach a man at our church who was well-known for animating early McDonald’s commercials and Gerald McBoing-Boing (I think it was) cartoons.  I told him that I wanted to someday work as a cartoonist for Walt Disney.  “No, you don’t,” was his curt reply.

Eight-balls are no rarer than 5’s, 14’s, or any other balls, I always say.  But if I’ve learned anything from Walt Disney over the years, it’s being a troubled genius is well worth the trouble.