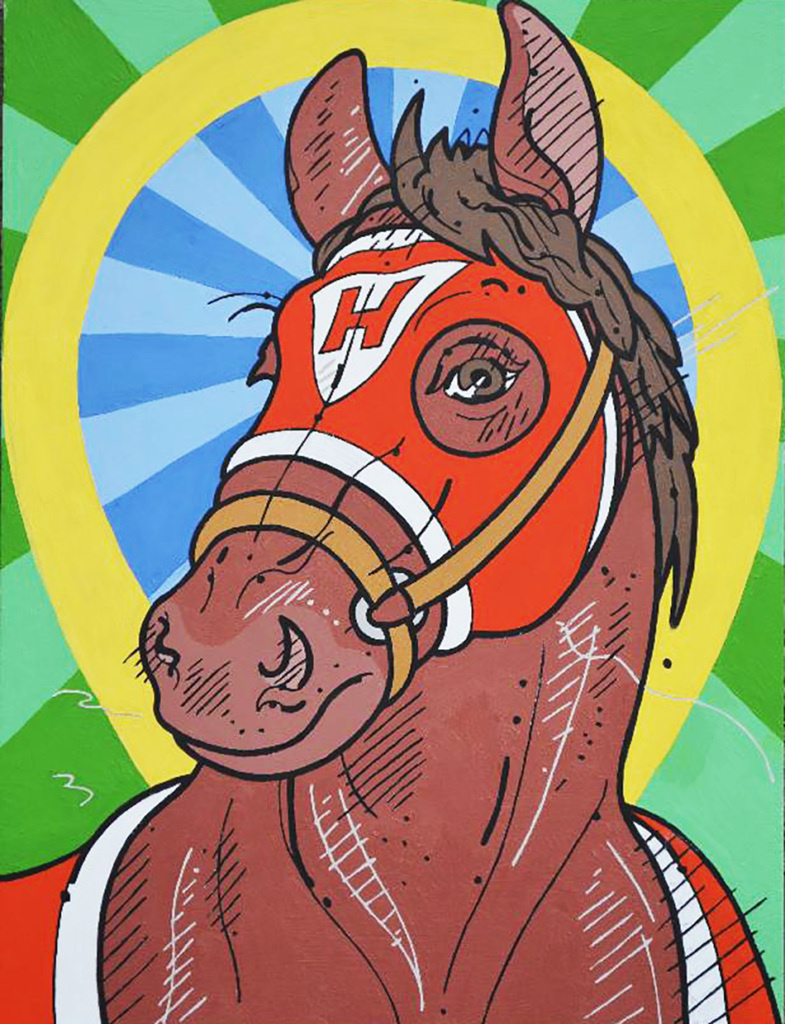 The horse is too small, the jockey too big, the trainer too old, and I’m too dumb to know the difference.    – Charles Howard  (Seabiscuit’s owner)

Seabiscuit’s job was to (literally) run for his life.  In his first 100 races, the racehorse never once finished in the money, and he was headed for the proverbial (or actual) glue factory in a (metaphorical) handbasket until he came under proper management and training.  Stubborn, little, gnarly and eccentric, he was a most unlikely racehorse to one day be setting long-standing track records.  Jockey Red Pollard said his greatest thrill was feeling Seabiscuit accelerate.  He felt like he was on an airplane rather than a horse.

Seabiscuit was particular.  He always insisted on bedding down at night with his pets: a goat, a dog and a duck.  I started doing likewise, and my life has improved immeasurably, as long as Ducky remembers his C-pap machine.

In this painting, I bend earth and sky in the background into a horseshoe halo to show the strange, inside-out world that domesticated animals live in.  The colors go all garish and checkerboardy, because that seems to be the look horseracing arrived at.  By dressing the animal something like a Mexican wrestler, with his trademark branded hood, I make a crack about Seabiscuit’s early career, racing in Tijuana.  But I am also speaking of animal domestication.  We own them, we dress them as we please, we make of them tools and playthings and billboards, and they teach us how to love.

Seabiscuit’s cocky gaze I caught in a horse’s eyes in the paddock of Hong Kong’s Happy Valley racetrack.  The horse told me he wanted to run and was going to win, and he did, and I earned some money through this interspecies clairvoyance.   Afterward, he and I went to Wanchai to drink beer and watch the fillies walk by.  He drank me under the stable.  Hay, we’re only human!