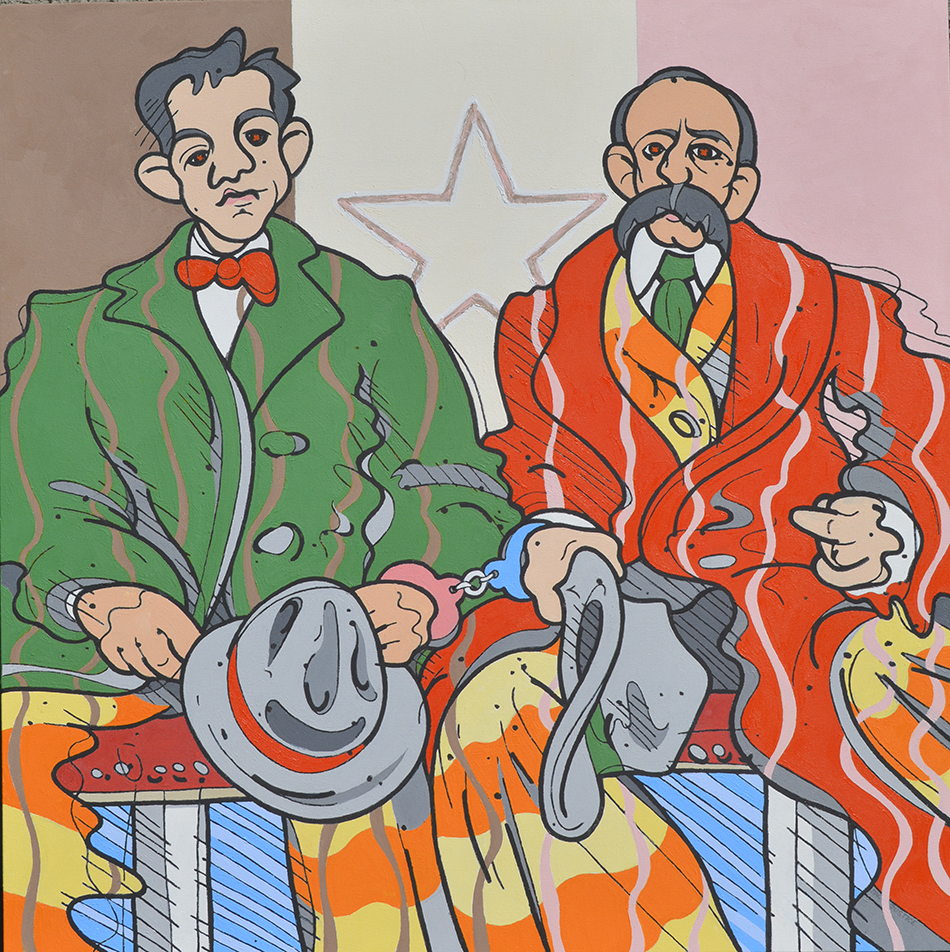 There is the best man I ever cast my eyes upon since I lived, a man that will last and will grow always more near to and more dear to the heart of the people, so long as admiration for goodness, for virtues, and for sacrifice will last.  I mean Eugene V. Debs.   – Bartolomeo Vanzetti

Nicola Sacco and Bartolomeo Vanzetti are as inseparable in our minds as Bonnie & Clyde.  Dean Martin & Jerry Lewis.  Caspar and Pollux.  The Smothers Brothers.  Republicans and sexism, or Chang and Eng (* Barnum’s co-joined twins — sick, I know).  In this painting I correct the order in which our heroes are usually photographically shown, by placing Sacco on the left and Vanzetti on the right.   The gagootz and the hot-head.  They showed up every day in the courtroom daily for the seven years of their trial, dressed like governors and courteously removing their hats for judges, ladies, photographers and executioners.

Neapolitan ice cream in the background plays the part of the Italian flag, though neither man was Neapolitan, nor were they crazy about Neapolitan ice cream.  I’ve noticed that few Italians are.  While they were in jail, they both preferred limon gelato with a double espresso after their secondi plata.

I feel I captured Sacco & Vanzetti about as well as an artist can, but the Bridgewater, Massachusetts Police captured them first.  Coincidentally, both men died on the same day, on August 23, 1927.  They didn’t even have to be uncuffed.  Both were innocent, but Vanzetti deserved the noose for his outrageous moustache alone.  Don’t be too impressed — his sister’s was even bigger.  Mi scusi!