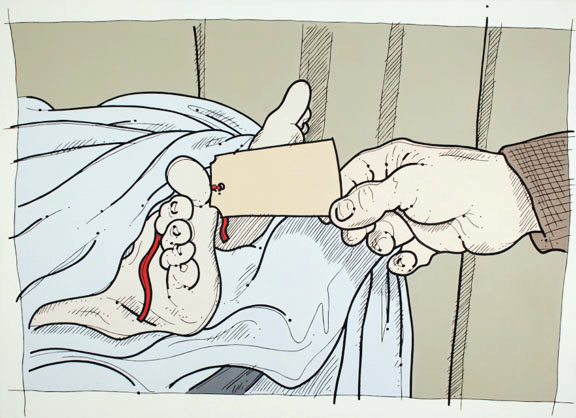 “Untitled” started out as a portrait of Bugsy Siegel having a bad heir day and wound up as something like an Unknown Soldier of everyday life.

When Bugsy Siegel was shot in the head in his living room, it is said that his eyeballs ricocheted around the room like a couple coked-up Superballs.  They were later found in a fish tank and behind a sofa cushion.

Chicago mobster Sam Giancana was also shot in the head, in his kitchen, presumably by a trusted insider.  He was found with a mop jammed down his throat, so never think hitmen don’t have a sense of humor.  I was once mistaken as Giancana’s assassin, I believe.  I used to jog in Oak Park, Chicago, and my route took me past the homes of Frank Lloyd Wright, Ernest Hemmingway and, I soon learned, Sam Giancana.  As I was jogging one breezy June day, two men in a car in a terrible hurry skidded up to me.  They both had standard issue ‘70s cop moustaches, pistols on the seat between them, and a phone in their car.  I had never seen a phone in a car before — that was Dick Tracy stuff in 1975.  “Is your name Peter?” one asked me.  Huh?  “Are you looking for your pet parrot?” asked the other.  No and no.  He said a bad word and pounded the dashboard, and the car peeled away.  It happened that fast.  The next day I read in the Chicago Tribune that Sam Giancana had been whacked, about a block from there.  Years later I learned that the killer had panicked and hidden himself in some bushes in a park overnight, and could not be located.  I think the men in the car were supposed to pick up the shooter, but couldn’t find him.

In “Untitled”, I chose to use putrid colors with names known only to Charon the ferryman, to suggest a cold, lifeless hospital basement room with way too much fluorescent lighting.  Colors like these need more playing time, so I sometimes oblige them.  But, if you’re thinking that I’ve really painted myself into a coroner this time, you may be right.