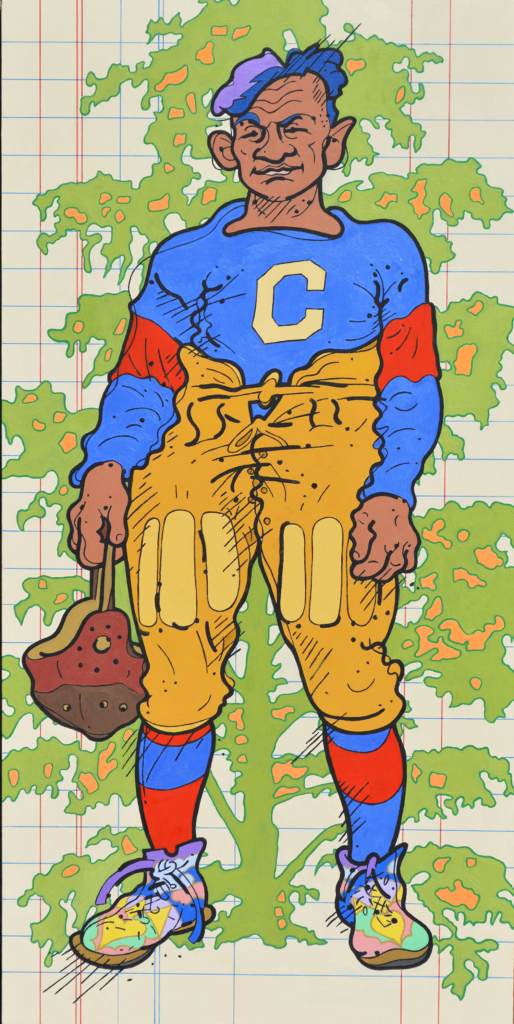 The Sac and the Fox Indians form the Mesquakie Nation.  The Sac (or Sauk) were the Osakiwugis, and the Fox were always the Mesquakie.  Both were driven into the Western Great Lakes region by the Iroquois, and then further west, across the Mississippi, by US expansion.  The Mesquakie Nation produced the athletic genius, Jim Thorpe (Wa-Tho-Huk), who excelled at every sport he tried.  The “C” on his uniform in this painting could stand for his professional football team, the Canton Bulldogs, or for the same town’s Football Hall of Fame, of which he is an inductee, or it might stand for his alma mater, the Carlyle Indian boarding school.  Thorpe struck gold in the 1912 Olympics but had it all taken back because he’d athleted professionally. His medals have now been returned and his records restored, only 110 years later.

I once visited the U.S. Army’s ‘Carlyle Barracks’, hoping to learn more about the Indian School that once existed there, but there was no trace of it other than a baseball uniform in a tiny museum in the former brig.  Given disproportionate space in the museum was a life-size diorama showing a mannequin of a doughboy sitting on his jail cell cot with a black eye and a hangover.  I asked the guards how I could learn more about the school, and they referred me to someone in town who they thought might give a shit. Then they offered me a look at a real Sherman tank (Ironically named for the genius who proposed poisoning Indians with yucky blankets) and a tour of the Omar Bradley Museum, but I didn’t have the time or the interest.  In fact, I was a bit irked, but outrage alone won’t solve the world’s problems, so I left.

That is how this painting drew me in the Boarding School direction, resulting in a youthful Thorpe with his bad, boarding-school haircut, Indian ledger paper drawing, and Western-art style tree in the background.