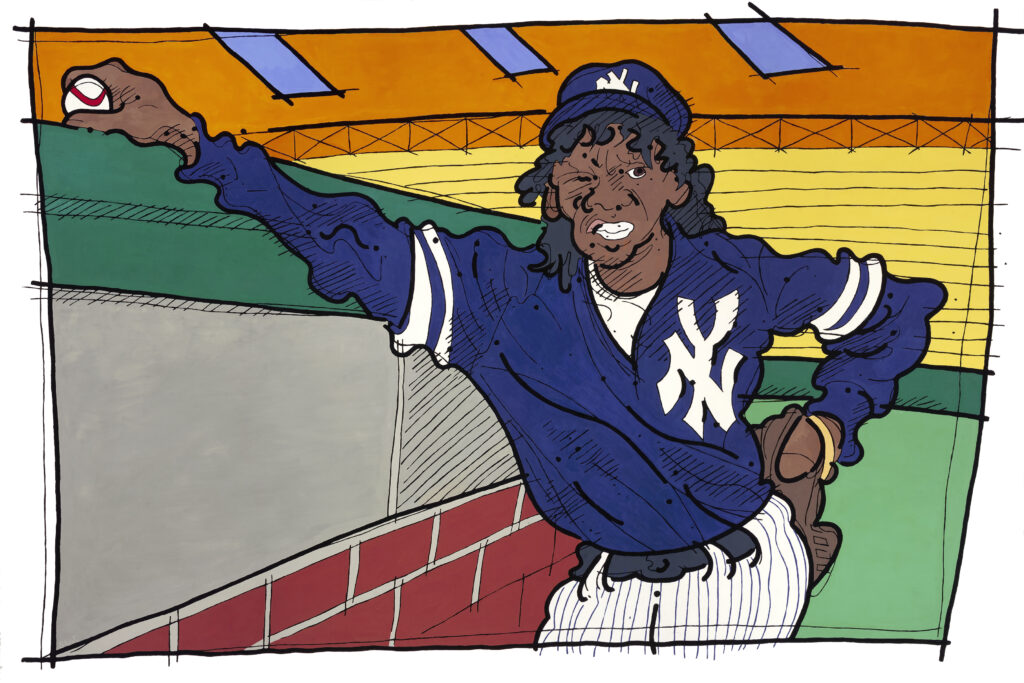 Where Have You Gone, Pascual Perez?

For the execution of the voyage to the Indies, I did not make use of intelligence, mathematics or maps.     – Christopher Columbus

Pascual Perez pitched for the Pirates, Braves, Expos, and the Yankees.  He was nicknamed “I-285” because he got lost on Atlanta’s Perimeter beltway one day when he was supposed to pitch, and he missed the kick-off.  He circled the city numerous times before getting pulled over by a cop and escorted to Cracker Stadium.  He was a product of the Dominican Republic’s baseball talent machine, where the ultimatum is to ‘throw baseballs or chop cane’, which is no small incentive.  A productive sugar cane harvester makes $1.50 per ton, times 2 tons per day, = $3.00 per day.  Pascual decided he’d rather throw baseballs and make $5,000 per day.  Not a bad choice.

This painting looks at our minorities and how they have always been expected to create a public front readable as an existing stereotype or be shunned for being rebellious.  You can be Yogi Berra or you can be Joe DiMaggio, though there’s always the Hank Greenberg route.  They survived being a minority each in his own way.

The title “Where Have You Gone, Pascual Perez?” riffs on the line, “Where have you gone, Joe Dimaggio?” from the Simon and Garfunkel song, “Mrs. Robinson”.  Paul Simon wanted to use Mickey Mantle’s name in the song rather than Joe DiMaggio’s, but the syllables wouldn’t fit.  True story.  He could have considered the Cincinnati Reds’ hot-tempered, hard-drinking pitcher, Van Lingo Mungo, but then everyone would be as confused as you are now.  Paul Simon wasn’t from Cincinnati, anyhow.  Paul and his brother, Art Garfunkel, grew up in the burrow of Queens, not far from Forest Hills, though the only use Paul had for a tennis racquet was using one to play air guitar.  That always drew a laugh.  But Paul was a very good baseball player and a very good one.  He batted lead-off and even stole home once.  Art was born with no athletic talent other than shelving books.