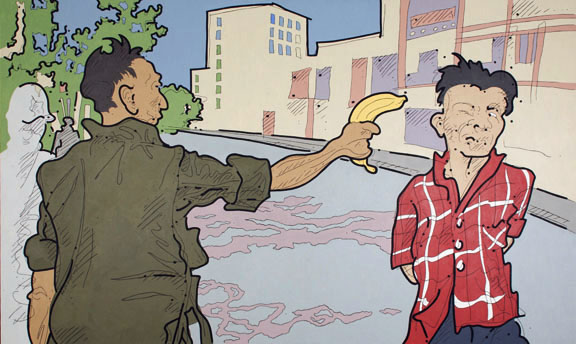 I shall not seek and I will not accept the nomination of my party for another term as your president.     – Lyndon Johnson

In 1994, I was confronted at a Columbus, Ohio solo art show by a Vietnam veteran who demanded to know how I had the audacity to portray a satirical scene from a war I did not attend.  I explained to him that this was my own, twelve-year-old’s evening news experience of seeing the same event, but backwards and in flip-flops, and he was satisfied enough to let me off with a stern warning.  A short time later, a carpenter offered me sex in exchange for the same painting, but I sure took advantage of him – I sold him a forgery!  What a sucker!  I’m lying, by the way — Gallant politely declined the offer.

I had another, more significant encounter with a Vietnam veteran once on the University of Cincinnati campus, where I was studying industrial design.  My college career had gotten off to a phenomenal start, but after a few years, the grind and the utter nonexistence of any social life, brought on by my frequent co-op (work-study program) absences, had begun to affect my mood.  One day I plopped down on a bench between classes and stared at the ground, feeling sorry for myself, feeling I could not go on, when a Vietnam vet sat on the other end of the bench and lit a cigarette.  We knew who these guys were – they were shaggy and bearded, looked to be 25 going on 55 years of age, and wore pieces of army surplus clothing.  This one smoked silently for a minute, then, without my saying a word, threw his cigarette down, got up in my face, and yelled, “Goddammit, are you gonna do something about it, or are you just gonna sit there?”  He stormed off, and I knew I had nothing to complain about.  My academic career was immediately back on track.

I have visited Ho Chi Minh City (now known as Saigon) and I’ve stood exactly where this original, iconic photo was taken, and almost got run over by a tuk-tuk.