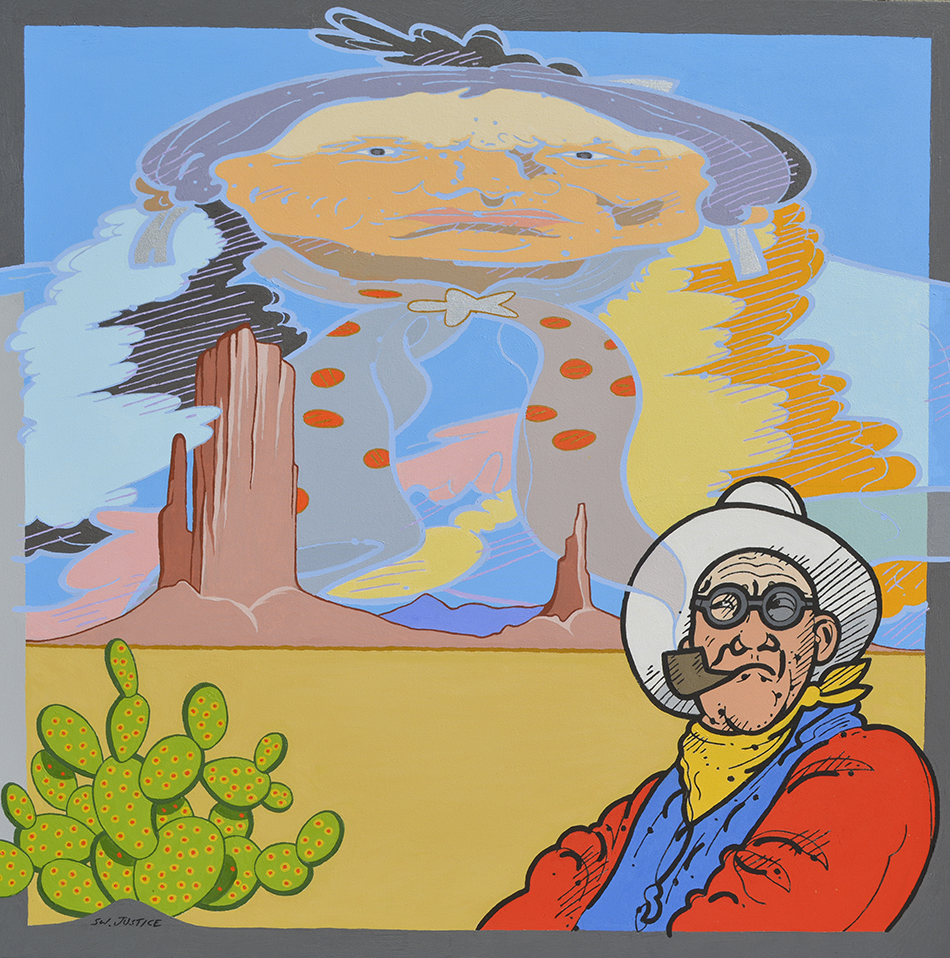 It is easier to get an actor to be a cowboy than to get a cowboy to be an actor.     – John Ford

This painting started out as a triple portrait of John Ford, Henry Ford and John Henry, three folk celebrities linked forever by name into a strange hedron representing working men of varying ethnicities and religiosities.  But the project unraveled as the three subjects drifted apart, each into his own separate painting, with Henry Ford in one, Hammerin’ Henry Aaron filling in for Hammerin’ John Henry in another, and filmmaker John Ford as the subject of this painting.

John Ford’s pictures differ from my pictures in that his moved.  They were moving pictures.  Mine might juke around a little bit but they rarely go very far.   Most of the time they don’t even leave the room.   In recent paintings I’d been permitting the backgrounds to assume a more dominant role in the composition, and this one pushes the subject almost entirely out the frame.  I have combined in this background Ford’s trademark “big sky” style panorama with a Hanna-Barbera “Queeksdraw” desert and the loathsome shitstorm thunderheads so eloquently captured in much contemporary Western art.  Upstaging Ford is the great Comanche chief, Quanah Parker, whose heart marks this painting’s center.  Ford’s movies frequently pitted Comanches vs. cowboys or cavalry in Monument Valley, which is actually Navaho land.  In fact, John Ford’s “Comanche” extras generally spoke Navaho, not Comanche.  But what do we know?

Ford said it is easier to get an actor to play a cowboy than to get a cowboy to be an actor.  No John Ford painting would be complete without a mention of his go-to fake cowboy, John Wayne, so here Ford wears Wayne’s shirt, in living Technicolor, from The Searchers (1956), a picture in which his character (Ethan Edwards) is slighted by Indians and mahem ensues.  And you thought Denzel Washington acted crazy in Training Day.