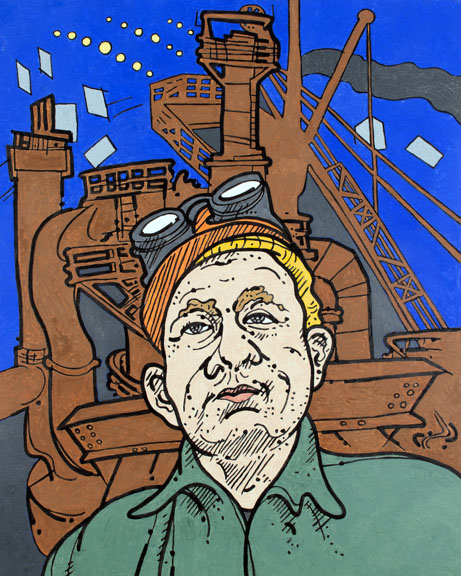 There never was a great character who did not sometimes smash the routine regulations and make new ones for himself.     – Andrew Carnegie

When I had just turned 18, I worked nights at J&L (later LTV) Steel’s Hazelwood (Pittsburgh) by-products plant, usually shoveling up the damp, crushed coal with which the coke ovens were charged.  I would spend what down-time I had sitting high on a balcony overlooking the river, reading the Sporting News and enjoying the man-made beauty that only a Rustbelt boy could appreciate.   What a show.  A celestial firmament of lights twinkled in the hills along the rivers, and Downtown glowed like Oz down around the riverbend.  I would often see a horizontal shaft of light materialize over the river, that would intensify for ten minutes until its source, a towboat pushing a dozen barges filled with peirogies, would grind its way past.  I could hear any train in the valley and could almost count the number of cars just from its sound.

“Joe Sibbitt” of the title is a fictitious any-man in blue-collar Pittsburgh (or any other Rust Belt town).  Someone might know someone who knows his neighbor’s sister, since all Pittsburghers are removed from one-another by only a couple degrees of separation.  The bigger-than-thou machinery, the dirt, the rivers, the rust, the lights twinkling in the smog, and the houses clinging to the hillsides; these were all things we grew up with and took for granted that the resta yins might git if ya weren’t sucha buncha jaggoffs.