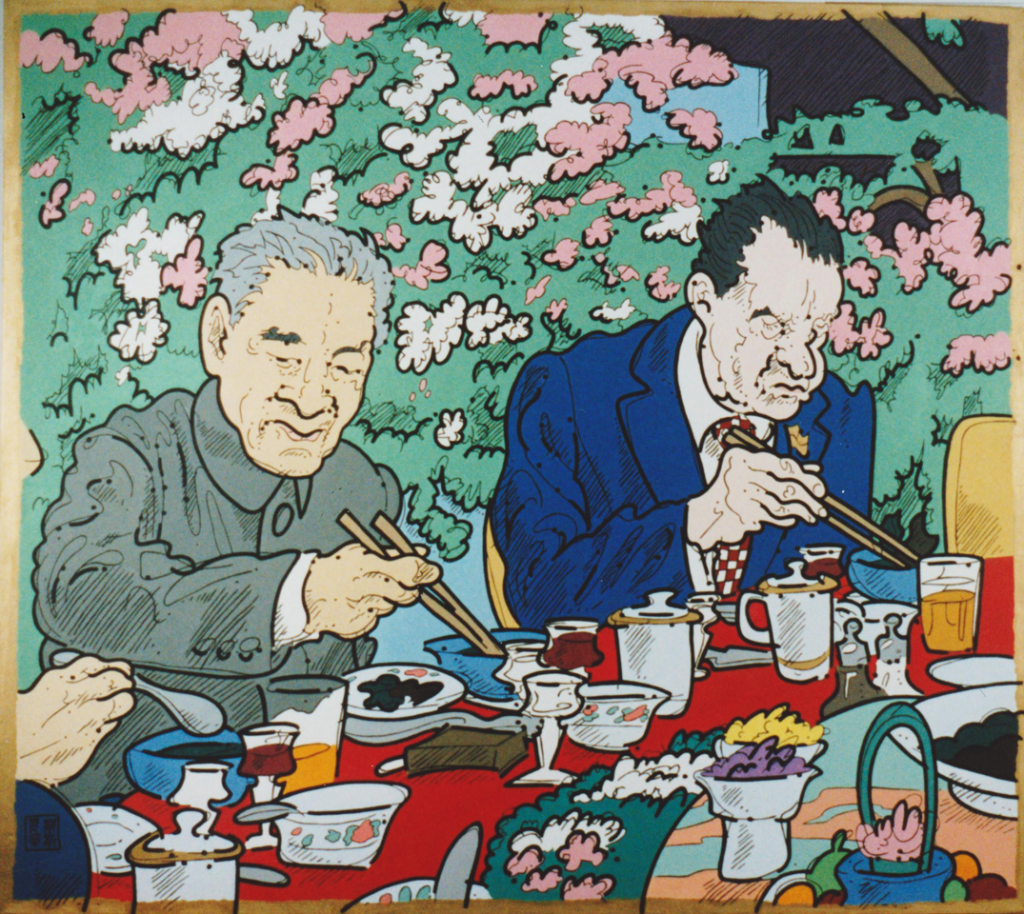 One of the delightful things about Americans is that they have absolutely no historical memory.     – Zhou Enlai

“Zhou and Dick” was conceived (as was our daughter) following a trip to Beijing in 1989, after the dust at Tiananmen Square had settled.  In fact, my wife and I were 2 of the 3 visitors on the 100-acre plaza when it was reopened the day after the army left.  The third was our guide.  We had watched the PLA’s convoys roar past our hotel in the middle of the night, with soldiers standing in the backs of troop carriers and dump trucks.   I pictured them being unceremoniously dumped into their camps at the end of their trip, like the truckloads of cabbage that were being dumped on the sidewalks throughout the city.  It was free for the taking, and everyone loaded up.  Due to miscalculation, too much had been planted that year, and the People were being told it was their patriotic duty to eat more cabbage. While at Tiananmen, we were granted a look at the Great Helmsman himself (Mao), in his mortified state.   They could have made him look as beautiful as Snow White, but instead he looked like a half-eaten plate of General Tsao’s pork, so I know it was really him.

Nixon was also in Beijing when we were there, and we saw him on Chinese television, chatting with Deng Xiaoping one evening, right after the Grain Report.  Tonnage was up and the future looked great.  I hadn’t seen Tricky Dick in a number of years and he looked frail and gray.  I was reminded of Nixon’s outreach to China in 1972, when the clumsy, wooden leader of the Free World supped with China’s ailing genius of politics and diplomacy, Zhou Enlai.  Here were the greatest politician that ever lived and one of the weirdest.

I here include details from my own dinners in China, with the cigarette pack begging for a Raymond Loewy make-over, and the orange pop, bottomless juice glasses of thin local beer, mystery broths and a graceful and smiling host.  The table cloth is red in my retelling of the event.  Need I explain why?